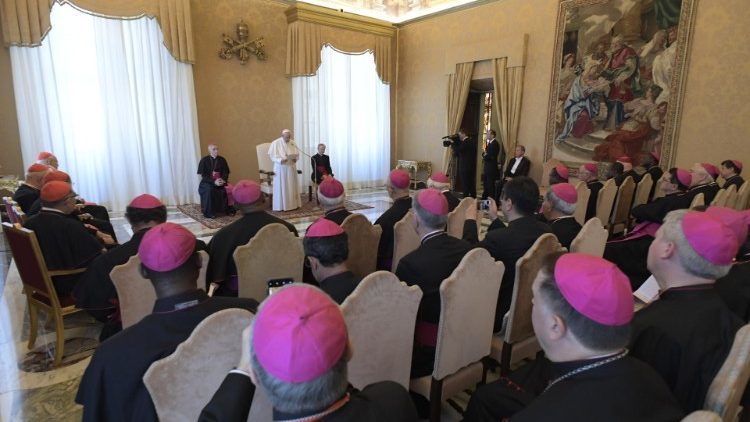 Pope Francis is encouraging attitudes of communion, service and mercy in Christian communities in order to create a “Eucharistic culture” through prayer and action grounded in the Eucharist.

In an audience to participants in the plenary assembly of the Pontifical Committee for International Eucharistic Congresses on Saturday in the Vatican, he said this will help the Church to meet the challenges of a secularized and globalized world.

National delegates of bishops’ conferences from around the world participated in the plenary assembly, in preparation for the next International Eucharistic Congress in 2020 in the Hungarian capital, Budapest.

Celebrating a Eucharistic Congress in the modern and multicultural city, where the Gospel and the forms of religious affiliation have been marginalized, the Pope said, means cooperating with God’s grace in order to spread, through prayer and activity, a “Eucharistic culture”

This culture, he pointed out, is grounded in hearing the Word of God and in breaking the bread in the Eucharistic celebration. For this to happen, the Holy Father recommended the attitudes of communion, service and mercy.

He explained that communion is established with the Lord and among the faithful at Mass where they are nourished by His body and blood.

The Pope explained that the attitude of service impels the Eucharistic community to be present in places of frailty, under the shadow of the cross, in order to share and to bring healing.

He said that through spiritual and corporal works, the balm of mercy can be poured in numerous places and situations, such as families in difficulty, young people and adults without work, the sick and the elderly who are abandoned, migrants experiencing hardship and acts of violence, and many other forms of poverty.

In these places of wounded humanity, the Pope said, Christians celebrate the memorial of the Cross and make living and present the Gospel of Jesus the Servant, by spreading the seeds of a Eucharistic culture by becoming servants of the poor.

The Pope said we complain about the “corrosive river of misery” flowing through our society, such as of oppression, arrogance, cruelty, hatred, forms of rejection and lack of concern for the environment.  But, he said, this swollen river is powerless against the “ocean of mercy” that inundates our world. The Eucharist, he said, is the wellspring of this ocean of mercy that helps form the image and structure of the People of God suited to our modern age.

The Holy Father wished that the Budapest Eucharistic Congress be able to foster processes of renewal in Christian communities, so that the salvation whose source is in the Eucharist will find expression in a Eucharistic culture capable of inspiring men and women of good will in the fields of charity, solidarity, peace, family life and care for creation.

Pope Francis: ‘Singing elevates soul to listen to the Spirit’