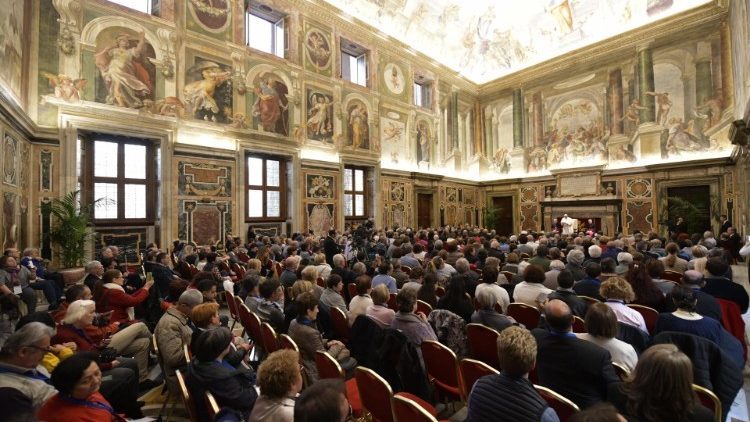 Share
Pope Francis on Saturday thanked members and associates of Italy’s Apostolic Movement of the Blind (MAC) for their witness as missionary disciples of the Gospel of love and encouraged them on their path of sharing and friendship, especially with the poorest and most abandoned of the world.

Some 400 members of the Apostolic Movement of the Blind met the Pope in the Vatican on the occasion of 90 years of their association.  MAC brings together both the blind and sighted people in sharing and in human promotion, not only in Italy but also in poor countries through a variety of apostolates.

Blind and sighted hand in hand

Noting the strong unity between the blind and the sighted, Pope Francis said that “the best response to offer to our society which, at times, tends to marginalize people with disabilities is the “weapon” of love, not the false, sugary and affected one, but the real, concrete and respectful one.”

“To the extent that one is welcomed, loved, included in the community and accompanied in looking to the future with confidence,” the Pope said, “we develop the true path of life and experience lasting happiness.”

The Holy Father Pope expressed satisfaction that as true missionary disciples of the Gospel, MAC members are open to the needs of the poorest and most suffering people in the world.  Instead of closing in on themselves with their disability, they courageously respond to Jesus’ invitation: “I was hungry and you gave me food, […] I was naked and you clothed me, I was sick and you came to visit me”.

The Pope also noted MAC’s 50 years of cooperation with the poor countries of the world, where the blind are more numerous and live in still very difficult conditions.  He commended its members for their work and cooperation during the past 5 decades with hundreds of missionaries and workers in the fields of health, education and social integration.

A poor Church for the poor

The Holy Father particularly singled out 2 elements of MAC’s charism.  Firstly, the sharing between the blind and the sighted is the fruit of solidarity in reciprocity, of ecclesial and social inclusion; and secondly, their choice of the poor in various ways and forms, is proper to the whole Church. “In this way,” he said, “you cooperate in making a poor Church grow for the poor.”

While thanking them for their witness, he also encouraged them in their journey, aware that the future of humanity lies in sharing and friendship, especially with the poorest and most abandoned.

Pope: Ratzinger Prize-winners help us turn our thoughts to God