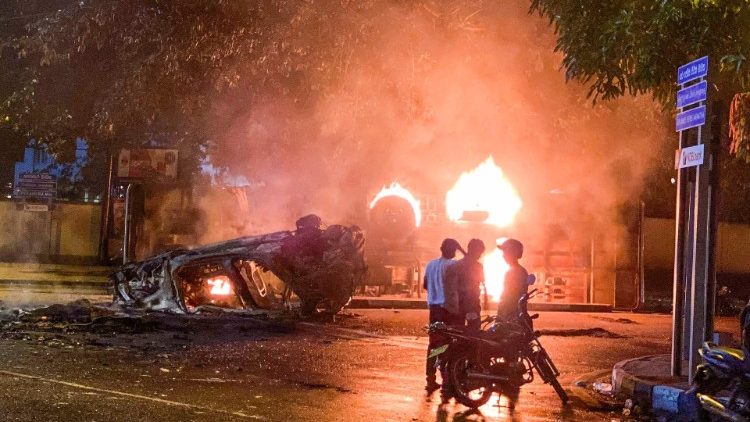 Pope Francis appeals for the people of Sri Lanka to make their voices heard in a peaceful way and for political leaders to heed their demands, as protests turn violent killing several people.

Largely peaceful protests in Sri Lanka have turned violent this week, leading to the deaths of eight people and the resignation of the Prime Minister.

Amid the social unrest, Pope Francis turned his thoughts to the South Asian nation while speaking at the Wednesday General Audience.

The Pope said he sends his greeting especially to the “young people who in recent times have made their cry heard in the face of the country’s social and economic challenges and problems.”

“I join religious authorities in urging all parties to maintain a peaceful attitude, without yielding to violence.”

“I appeal to all those with responsibilities to listen to the aspirations of the people and to ensure full respect for human rights and civil liberties.”

An economic crisis brewing for several months in Sri Lanka boiled over on Monday.

Protesters had been demonstrating against the ruling class in a largely peaceful way, demanding the resignations of the Rajapaksa brothers, who served as president and prime minister.

Their patience ran out on Monday after government supporters attacked an anti-government group in Colombo, burning down their protest encampment.

Violent clashes broke out, leaving eight people dead and over 200 wounded. Prime Minister Mahinda Rajapaksa tendered his resignation within hours of the violence. President Gotabaya Rajapaksa has so far refused to step down.

Sri Lanka’s economy has been under severe strain since the outbreak of the Covid-19 pandemic put the brakes on its tourism-dependent economy.

The country has depleted its reserves of foreign currency down to only about US$50 million, leaving it unable to pay for imports.

Sri Lankans, whose population numbers around 22 million, face massive shortages of food, medicine, fuel, and other essential goods, many of which are imported from abroad. Residents are forced to endure up to 13 hours of electricity blackouts a day.

The government has turned to the International Monetary Fund (IMF) for a rescue package, as well as to India and China.

Protesters’ ire has focused on blaming the Rajapaksa family for their economic woes.

Security forces have responded to the violence with water cannon and tear gas, and the defense ministry has ordered police to shoot anyone caught damaging public property or threatening lives.