Pope at General Audience recalls his visit to Baltic nations 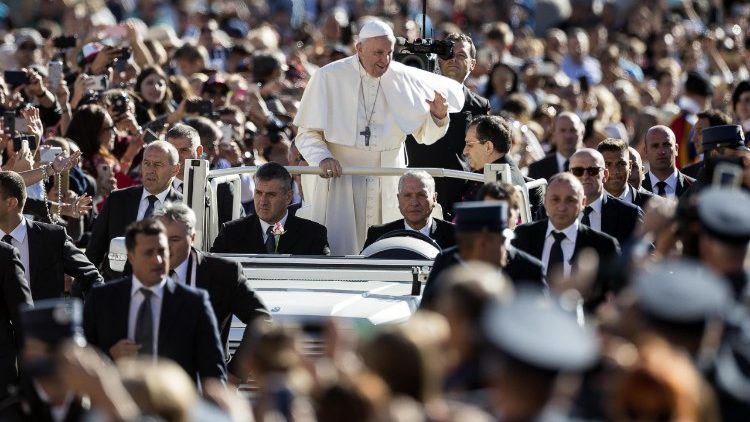 Pope Francis dedicated the reflection of this week’s General Audience to his apostolic journey to the Baltic nations, September 22-25.   He said he visited Lithuania, Latvia and Estonia, on the occasion of the centenary of their independence.   They lived half of the 100 years under the yoke of occupations, first under the Nazis and then under Soviet rule.

“They are peoples who have suffered greatly,” the Pope said, “and for this reason the Lord has looked upon them with predilection.”

The Holy Father expressed his gratitude to the presidents and civil authorities of the three nations or the welcome given him. He also thanked the bishops and all those who have helped to prepare and implement the ecclesial event.

Pope Francis noted that his visit took place in a context that has  greatly changed since the visit of his predecessor 25 years ago, soon after the 3 countries regained their independence from soviet rule. Hence his mission was to proclaim once again to those peoples the joy of the Gospel and the revolution of mercy, of tenderness, because freedom is not enough to give meaning and fullness to life without the love that comes from God.

The Pope noted that the Gospel, which in times of trial gives strength and animates the struggle for freedom, become in the time of freedom the light for the daily journey of individuals, families, societies, and is salt that gives flavour to ordinary life and preserves it from the corruption of mediocrity and selfishness

The Pope noted that in Lithuania, Catholics are the majority, while in Latvia and Estonia Lutherans and Orthodox prevail, but many have moved away from religious life.  So the challenge is to strengthen the communion among all Christians which already developed during the harsh period of persecution.  In fact, the Pope stressed that the ecumenical dimension was intrinsic to this journey, and found expression in the moment of prayer in the Cathedral of Riga and in the meeting with young people in Tallinn.

In addressing the authorities of the 3 countries, the Pope said he stressed on their contribution to the international community, especially to Europe.  This contribution is their human and social values passed through the crucible of trial.

The Holy Father also encouraged dialogue between the elderly and young generations so that their contact with their “roots” continue to enrich the present and the future.  He also urged them to always combine freedom with solidarity and welcome, according to the tradition of their lands.

The Pope particularly mentioned his meetings with the young in Vilnius, Lithuania and with the elderly in Riga, Latvia.

The Pope said that in front of the Vilnius cathedral, boys and girls prayed and sang, bringing out the theme of his Lithuanian visit: “Jesus Christ, Our Hope”. They showed the openness of the soul to God, the joy of serving others, how to come out of the fences of “I” and the capacity to rise after falling.

Later, in a meeting with the elderly in Latvia, the Pope stressed the close link between patienceand hope. Those who have gone through hard trials, the Pope said, are the roots of a people that need to be safeguarded with the grace of God, so that the new shoots can draw from them and flourish and bear fruit.  The challenge for those who grow old is not to harden within but to remain open and tender in mind and heart.  This is possible with the “sap” that the Holy Spirit provides in prayer and in listening to the Word.

In his meetings with priests, consecrated persons and seminarians in Lithuania, the Pope found that the dimension of steadfastness was essential for hope, in order to be centered in God and firmly rooted in His love.

In this regard, priests and men and women have given and continue to give great testimony. They have suffered slander, prisons, deportations…, but they have remained firm in the faith. The Holy Father urged them not to forget them but to preserve the memory of the martyrs and to follow their examples.

The Pope recalled the tribute he paid to the victims of the Jewish genocide in Lithuania, 75 years after the closure of  the great Ghetto in Vilnius which was the antechamber to the death of tens of thousands of Jews.

He also visited the Museum of Occupations and Freedom Fights.  He prayer in the cells where opponents of the regime were detained, tortured and killed.

Years and regimes pass by, but above the Gate of Dawn in Vilnius, the Pope said, Mary, Mother of Mercy, continues to watch over her people, as a sign of sure hope and consolation.

The Pope said that a living sign of the Gospel is always concrete charity.  Even where secularization is very strong, God speaks in the language of love, of care, of free service to those in need.  And then hearts open and miracles happen, sprouting new life in the deserts.

The Pope noted that in the three Masses in Lithuania, Latvia and Estonia, the faithful holy People of God on their way renewed their “yes” to Christ our hope.  They renewed it with Mary, who always shows herself to be the Mother of her children, especially of the suffering.  They renewed their “yes” as a chosen people, priestly and holy, in whose heart God awakens the grace of Baptism