Pope at Angelus: prayer opens our heart to the Lord 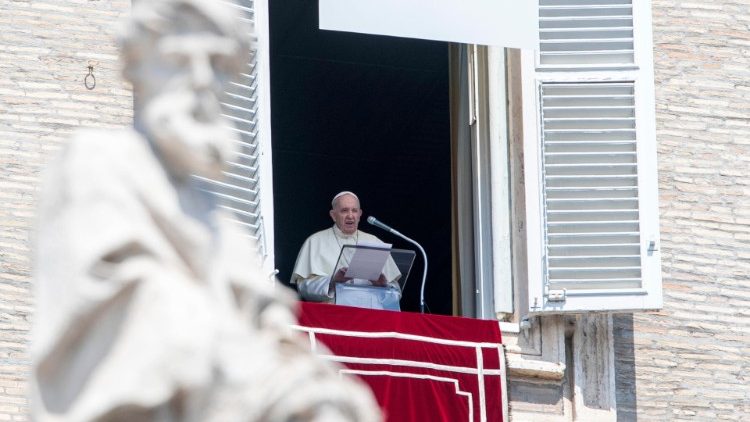 Pope Francis addresses the faithful gathered in St Peter’s Square for his Sunday Angelus and asks that on the day of the Baptism of the Lord, they reflect on the importance of prayer and remember the date of their own baptism.

Pope Francis on Sunday turned to the day’s Liturgy and recounted, to the faithful gathered in St Peter’s Square for his Angelus, the scene in which Jesus goes to the banks of the River Jordan and is baptised by John the Baptist. This is where Jesus’ public life begins, said the Pope. “After some thirty years of living in hiding, Jesus does not show up with a few miracles or by climbing up on a cathedral to teach. He lines up with the sinners who were going to be baptised by John”. Thus,  the Pope noted, He shares the lot of us sinners, He comes down to us and “dips into our waters to heal them”.

Pope Francis went on to comment on the fact that the text says that at the moment when Jesus received Baptism “He was praying”. It is good to contemplate this said the Pope, and to ask ourselves whether He prays like we do. “Yes”, continued the Pope, explaining that many passages in the Gospel tell us that Jesus prays often and that “His prayer is a living dialogue, an intimate relationship with the Father”. Thus, continued the Pope, “in today’s Gospel we can see the “two movements” of Jesus’ life: on the one hand, He descends towards us, in the waters of the Jordan; on the other, He raises His gaze and His heart in prayer to the Father”.

This is a great lesson for us, continued the Pope: “we are all immersed in the problems of life and in many intricate situations, called to face difficult moments and choices that pull us down”. So as to not be dragged down and crushed, he continued, “we need to lift everything upwards”. He explained that prayer “is not an escape route” but “a way to let God work in us”. Prayer helps us because it unites us to God and opens us up to an encounter with Him, said the Pope, adding that “prayer is the key that opens the heart to the Lord”.

Pope Francis went on to stress that prayer gives life oxygen, breathing space even in the midst of anguish, and makes us see things more widely. Above all, he said, bringing his catechesis to an end, “it allows us to have the same experience as Jesus at the Jordan: it makes us feel like children loved by the Father”.

“Let us not forget the date of our Baptism”, concluded the Pope, “Let us listen to his Word”.