Pope appeals for prayers for Syria 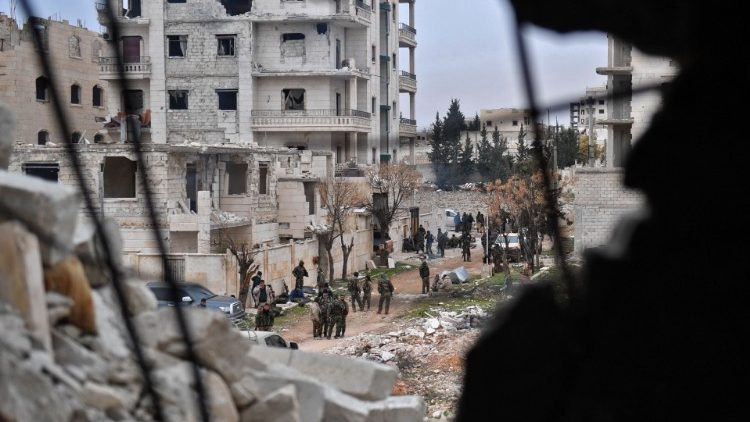 Pope Francis asks for prayers for war-torn Syria where so many innocent people are being forced to flee violence.

“So many families, so many elderly people and children, are forced to flee from the war,” said Pope Francis on Wednesday during the General Audience in the Paul VI Hall, as he asked those present to take a moment to pray for that “beloved and martyred” land.

“Syria has been bleeding for years,” he said.

The Pope’s request for prayers for the people of Syria comes on the heels of an appeal he issued on Sunday in which he expressed concern for Syrians in Idlib Province.

“Painful reports are still emerging from northwestern Syria, particularly regarding the plight of so many women and children, as well as of people forced to flee because of a military escalation,” he said during the Angelus.

He appealed to the international community and to all parties involved to search for a diplomatic solution to end the conflict and safeguard lives.

Meanwhile, Turkey announced Wednesday it is sending a delegation to Moscow in coming days to discuss the escalating conflict in Syria’s Idlib province where around 1 million people have been displaced due to Russian-backed Syrian attacks.

The Turkish Foreign Minister said Germany had provided his country with 40 million euros in support of Turkish plans to settle Syrians fleeing from Idlib.

More people have fled fighting in Syria over the past 10 weeks than at any other time in the 9-year-old conflict. The UN warned this week that the city of Idlib, where many are sheltering, could become a graveyard if hostilities continue.

Syrian government forces are shelling their way northwards, backed by Russian air strikes, driving people towards the Turkish border as they try to seize remaining rebel strongholds near Idlib and Aleppo.

Turkey, which backs the rebels and is fearful of additional refugees, has retaliated militarily, with displaced civilians caught in between.

Pope prays for those affected by coronavirus

Pope’s schedule for Lent and Easter

Pope: ‘The only way out of the current crisis is all together’

“Euthanasia is a crime against human life, incurable does not mean end of care”

Taking care of the sick, learning what it means to love

Pope: each one is beautiful to God who loves us

“Euthanasia is a crime against human life, incurable does…

Taking care of the sick, learning what it means to love