Pope appeals for peace in the Caucasus 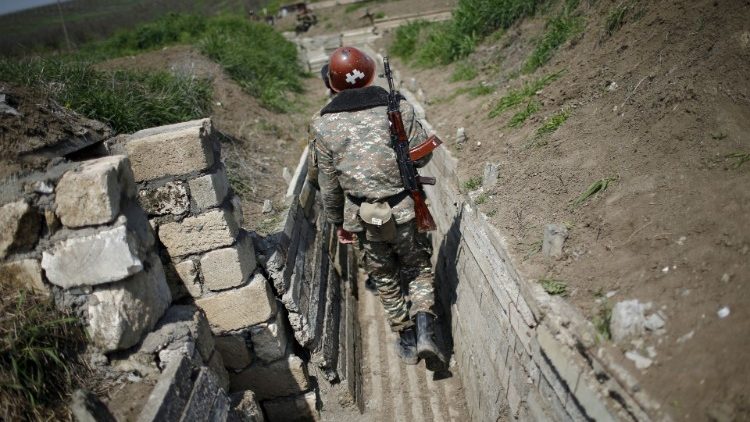 Pope Francis appeals to leaders in Armenia and Azerbaijan to find a negotiated solution to the crisis in the region.

Pope Francis has appealed to conflicting parties in the Caucasus nations of Armenia and Azerbaijan to “accomplish concrete deeds of goodwill and fraternity” for a peaceful solution.

Speaking on Sunday after the Angelus prayer, the Pope said he has had worrying news of clashes in the Caucasus region and that he is praying for peace.

He urged leaders to find a solution “not through the use of force and arms, but through the means of dialogue and negotiation” and he asked all Christians to gather with him in prayer for peace for the region.

On the ground, Armenia declared martial law and mobilised its male population on Sunday after clashes with Azerbaijan over the breakaway Nagorno-Karabakh region in which both sides reported fatalities.

Authorities in Nagorno-Karabakh, a mainly ethnic Armenian region inside Azerbaijan which declared independence in 1991, also announced martial law and mobilised the male population after clashes which the two sides blamed on each other.

Media sources said Armenia accused Azerbaijan of carrying  out an air and artillery attack on Nagorno-Karabakh, but Azerbaijan said it had responded to Armenian shelling.

It is not the first time Pope Francis has appealed for peaceful mediation to the brewing conflict. On 19 July 2020, he expressed concern at news of violence in the Caucasus and appealed to the international community to engage in mediation.

Pope Francis also had words of solidarity for all those who are struggling financially because of the impact of the Covid-19 pandemic on the tourism sector.

He noted that it is World Tourism Day saying “The pandemic has hit this very important sector hard in so many countries.”

He voiced encouragement “to those who work in the tourist industry in particular to the small family-owned businesses and young people” and expressed his hope that all might soon return to normal.

Prayers for survivors of breast cancer

Looking across the rainy Square, Pope Francis noticed a group of women with a banner identifying them as survivors of breast cancer.

“A special thought to the women and all the people involved in the fight against breast cancer,” he said: “May the Lord sustain your commitment.”

Pope at Angelus: ‘a true Christian chooses good over evil every day’