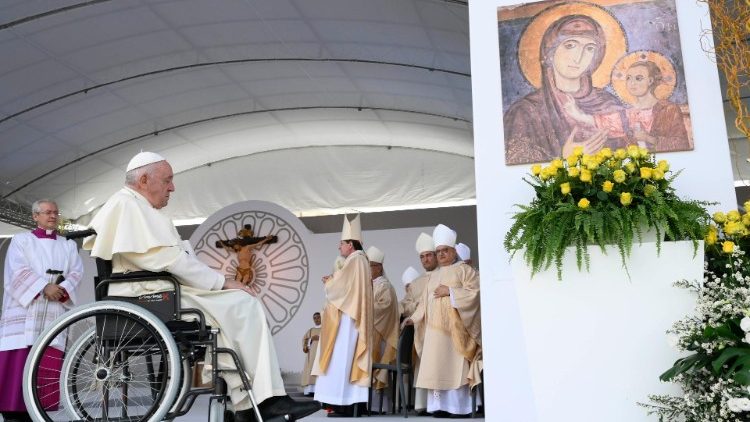 Pope Francis appeals for international attention and peace for the suffering peoples of Myanmar, Ukraine and Cameroon.

Pope Francis on Sunday appealed to the world not to forget or ignore the suffering of the population in Myanmar where violence continues to cause death and displacement.

Speaking before leading the Angelus Prayer at the conclusion of Holy Mass in the city of Matera where he marked the end of the National Eucharistic Congress, the Pope said he is thinking of Myanmar, where “for more than two years that noble country has been martyred by serious armed clashes and violence, which have caused many victims and displaced persons.”

“This week,” he said, “I heard the cry of grief at the death of children in a bombed school.”

“May the cry of these little ones not go unheard! These tragedies must not happen!”

Image of the school in Sagaing, Myanmar after the air strike by Myanmar Armed Forces

Thousands have been killed since Myanmar’s military seized power in February 2021 from Aung San Suu Kyi’s elected government, plunging the country into what some UN experts have described as a nascent civil war that has killed thousands.

The Pope also reiterated his concern and closeness with the people of Ukraine and called for solutions to the seven-month war.

He invoked the Virgin Mary, Queen of Peace, to comfort the “martyred Ukrainian people” and appealed for action from international leaders, that they may find “the strength of will immediately to find effective initiatives to bring the war to an end.”

Image of the war in Ukraine

Pope Francis also said he joins in the appeal of the bishops of Cameroon for the liberation of eight people kidnapped in the diocese of Mamfe, including five priests and a religious sister.

“I pray for them and for the populations of the ecclesiastical province of Bamenda: may the Lord give peace to hearts and to the social life of that dear country.”

The priests and the religious sister were reportedly kidnapped by unknown assailants who set fire to a church on Friday in western Cameroon.

This was announced in a statement by the Bishops of the ecclesiastical province of Bamenda.

The Mamfe diocese, located in the southwest region, is one of two restive regions in Cameroon where separatists have been waging war against the federal authorities since 2017.