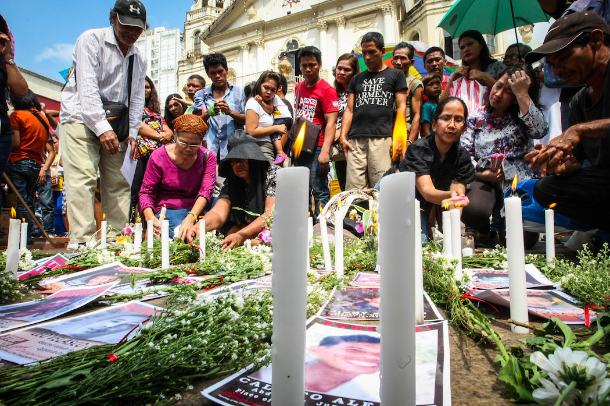 Families of victims of enforced disappearances in the Philippines, or “desaparecidos,” offered flowers and candles for their missing loved ones on All Souls’ Day as they protested what they described as “government inaction” on the issue.”Let us bury the remains and build tombstones with their names. Allow us to grieve with dignity,” said Erlinda Cadapan, mother of a missing student activist, during a protest outside Manila’s Minor Basilica of the Black Nazarene.”We have nowhere to offer candles and flowers. Give us the chance to provide decent burial for them,” said Cadapan, who also serves as spokeswoman of the group Families of Desaparecidos for Justice.The activity was also a chance for families of victims to “celebrate” the conviction of a former army general who was accused of the abduction and disappearance of Capadan’s daughter, Sherlyn, and another student activist, Karen Empeño.”He is now in jail, but I am not happy because my daughter and Karen are still missing,” said Cadapan. “I will only be at peace once I see the body.” At least 1,889 cases of involuntary disappearances have been recorded in the country since martial law was declared in the early 1970s, according to human rights group Karapatan.Karapatan spokeswoman Maria Christina Guevarra said most of the victims were farmers, community leaders and human rights activists.The greatest number of cases happened during the administration of former president Corazon Aquino, with at least 821 cases.At least six people were reported abducted and are still missing since President Rodrigo Duterte came to power in 2016.The ecumenical group Promotion of Church People’s Response called on church leaders to start a “ministry for the missing bodies and souls.””We encourage religious institutions to take a hand in bringing justice to victims of involuntary disappearances. Let us pray for the souls and help find the bodies,” said Nardy Sabino, the group’s secretary-general.

All Souls feast is time to remember, to hope, pope says