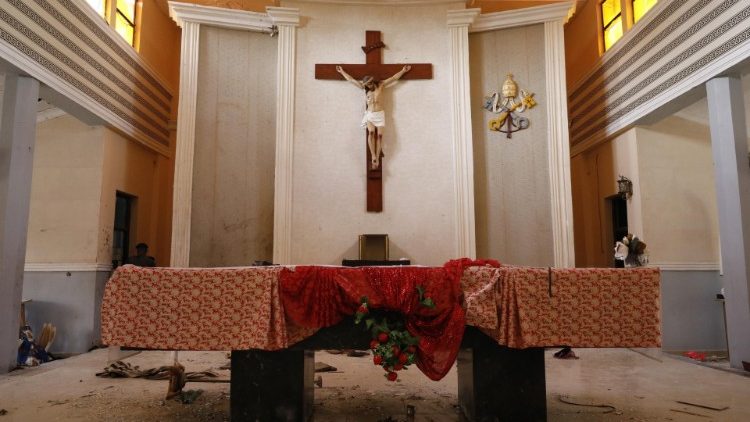 Bishop Jude Arogundade of Ondo asks for prayers for the faithful of the diocese where a horrific attack on Sunday left dozens of faithful dead at St. Francis Xavier parish in Owo, Ondo state, Nigeria.

The Sunday attack on a Church in Ondo state, which left dozens of Catholic faithful killed, still has many people reeling from the shock of the horrific news.

Unidentified armed persons stormed St. Francis Xavier Church in Owaluwa, Owo during Pentecost Sunday Mass, shooting and killing at least 50 congregants, wounding many others, and leaving behind a gory scene. According to several reports, the gunmen also employed explosives in the attack.

The deadly incident has been condemned by both civil and religious authorities, and Pope Francis, on Monday, sent a telegram to the Bishop and faithful of the diocese of Ondo, conveying his sorrow for the attack and assuring those affected by the “act of unspeakable violence” of his spiritual closeness.

In an interview with Vatican News, Bishop Jude Arogundade of Ondo speaks about this difficult time for the Church in his diocese and about how the faithful are trying to recover from the shock, pain and sorrow of Sunday’s attack.

“My first sentiment was utter disbelief…How can a human being do this!? Where is this coming from!?” says Bishop Arogundade, describing his reaction upon receiving the news of the Sunday attack.

His shock also stems from the difficulty in understanding how anyone would go into a holy place – “a Church for that matter” – with the intention of killing everyone.

He narrates that he immediately started placing calls to security operatives and any individuals of influence he knew who could be of help in the situation.

However, in the midst of the shock and chaos, he did not forget to seek help from Our Lord: “I went before the Blessed Sacrament, holding on to Our Lord Jesus Christ”.

Dozens killed, others injured and hospitalized

Describing the present state of things, Bishop Arogundade says that there are still many injured people who were hospitalized after the attack.

Many, he explains, still need medical care, bullet extractions and x-rays to ascertain the kinds of injuries they have suffered. Some with minor injuries have been discharged and are out of hospital but regretfully, some have also died during surgical operations. In all, about 80 – 90 victims of the attack are in stable condition.

He laments the many people who died in the attack – husbands, wives, children, entire families – including both parents of a seminarian of the diocese.

The Pope’s closeness to the Church in Ondo

Bishop Arogundade welcomes the messages of closeness coming from several quarters – both civil and religious – in the wake of the deadly attack.

He particularly expresses gratitude to Pope Francis for his telegram and his words of consolation and notes that he will soon be sending a full report of the tragedy in his diocese to the Vatican.

The Bishop notes that these difficult moments are not new in the history of the Church, yet the Church has not let the good she does be overcome by them.

In these days, the Bishop is actively involved in reaching out to the families of the victims and those who lost loved ones in the attack, doing all he can to provide some form of consolation. People of goodwill have also been helping him in his efforts.

In the face of the sorrow and pain, he notes that “our people are a people of faith.” Despite the situation, “they are still calling on God, on the name of God. Some will tell you that it could have been worse if not for God,” he added.

In recent years, Nigeria has had a running battle with insecurity, fueled by increased attacks by armed bandits and kidnappers, as well as continued instances of violence by extremist religious groups. Most of the violent incidents have been concentrated in the northern and middle belt regions of the country but are spreading to other parts.

Sunday’s attack, according to the bishop, is the first of its kind in the history of Ondo state where security forces have been working to curb the activities of bandits suspected to be in the forests surrounding the area. Many speculate that these “unidentified” bandits come from other countries bordering Nigeria.

Bishop Arogundade seized the opportunity of this interview to call on the international community to challenge the Nigerian authorities to do more to ensure the protection of the lives and properties of its citizens, especially in the face of the increasingly daring attacks by unidentified bandits.

Hope in the midst of dark times

As the Church in Nigeria struggles to recover from these difficult times, bishop Arogundade has a message for the nation and for the faithful of the diocese of Ondo.

“We will get over this. This is a stage. This, too, shall pass,” he assured. “And we will have a stronger Church, a better Church, a more beautiful Church, a Church that the world can be proud of.”

In this regard, he draws consolation from his episcopal motto: “The Lord is my light and my help”, trusting that the Lord will come to the aid of his people.

He concludes with a request for prayers, requesting the faithful to pray so that “the light of Christ may shine in this darkness that is hovering over us.”

Nigeria church attack: Priest says ‘God is on our side and faith is alive’