Namibia Bishop at Synod: ‘we need to empower women and youth’ 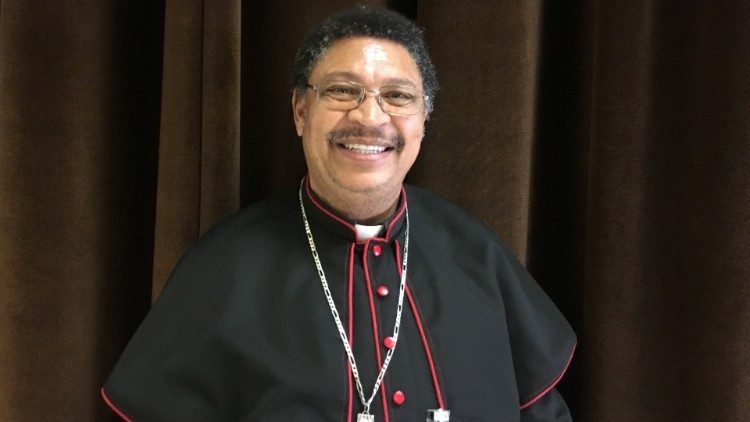 Vast open spaces, spectacular scenery, magnificent wildlife are the first images that come to mind when think of the southern African nation of Namibia.

This beautiful, semi deserted and sparsely inhabited corner of the world has a new shepherd leading the flock in the Catholic Diocese of Keetmanshoop, and he is promising to work for change.

Bishop Willem Christiaans was appointed to head the diocese in February this year after having served as diocesan administrator and national director of the Pontifical Mission Societies in Namibia.

Born in 1961, Bishop Christiaans is probably one of the youngest Synod Fathers here in Rome for the Synod of Bishops on Young People, the Faith and Discernment. Talking with Linda Bordoni he spoke of his determination to work with the priests of all the parishes of his diocese to make sure women and young people are given the role and the voice they deserve:

Bishop Will – as he likes to be called – explains that his Diocese comprises the whole southern part of Nambia – “from Rehoboth right down to the South African border.”

It’s a vast diocese that includes large swathes of semi-deserted and uninhabited land. All in all, the diocese counts 45,000 Catholics, who, together with the Lutherans and Anglicans make up the most numerous faith-based communities of the region, but he warned: “At this moment in the life of the country there are many of our young people who are looking for ways and means to be truly part of the life of the Church, and if we don’t offer it to them they will leave and join the other churches, especially the Pentecostal Churches”.

Bishop Christiaans who is due to present his intervention during part-three of the Synod, revealed that it focusses on the call to holiness because, he says, “that’s what young people are searching for that in their lives” despite the technological revolution and everything else, he says he is convinced that young people are searching for ways to make their lives meaningful.

The need to listen

“What I have discovered listening to the interventions in this Synod is the lack of listening in the Church to our young people. This has been a big part of the synod: listening”.

Bishop Christiaans reflects on how too often “We don’t really find time to listen to our young people, when they want to come and talk to us about their lives and other things, we are often too busy”.

He also says that in his own diocese there are too few priests, pastoral workers, nuns, laity who are really geared towards the young and find time to accompany them.

“It has been a wake-up call for me that we truly need to tackle that area seriously: find time to listen to the young people despite the busy schedules that many of us have”.

With a tone of regret the bishop also talks of how a young person from his diocese was in Rome in March to take part in the preparatory meeting for the Synod, and of his disappointment no young people from Southern Africa are here today.

“She was actually representing the Namibian Bishops’ Conference, she was very active in bringing the plight of young people to that preparatory meeting in March” he says explaining that much energy was put into the preparation for the Synod also with a follow-up meeting in July in Johannesburg with the Inter Regional Meeting of the Bishops of Southern Africa (IMBISA).

“There were about ten or twelve young people: very, very vital in their own outspoken way and we thought that they would be presented at this Synod. We discovered that none of them are here (at least to my knowledge), the reason being that only few young people were chosen to be present. So that is part of my disappointment: that not one of those young people from southern Africa – from IMBISA – are here” he says.

Bishop Christiaans says the message he is going to take back with him “is that young people are so, so important in our Church”.

They are a vital component of the Church, he continues, and says “it it’s the biggest mistake ever not to make them part of everything we do, in our discussions, in leadership, wherever… they are vital. And if you have a vital element that is not being part, you are doomed for failure, and this is my message”.

Bishop Christiaans also points out that gender issues are at the forefront in his country right now. “Women, he stresses, need to play a vital role in all spheres of leadership, and they are not being recognized in many spheres, also in the life of the Church”.

Summing up, says Bishop Christiaans, women and youth need to be given the opportunity and the space to be able to play a vital role in society and in the Church.

“As the bishop of the diocese this is something I am going to push for: I am going to work with the priests in all the parishes of my diocese to make sure women and young people can play their roles: this is important”