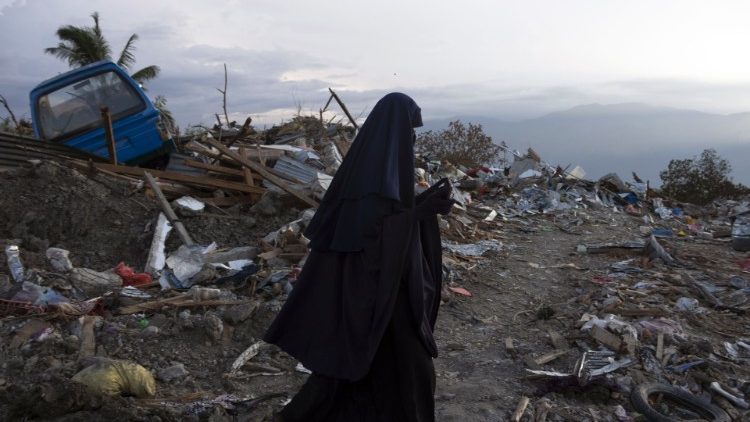 The official death toll from Indonesia’s 7.5 magnitude earthquake and tsunami on Sept. 28 has risen to 2,045, with more bodies being found as some 10,000 rescuers search ruins in the coastal city of Palu in Central Sulawesi province.

More than 82,000 people were displaced in the worst-hit city of Palu, over 1,500 km northeast of the capital, Jakarta, and 67,000 homes destroyed or damaged according to Indonesia’s disaster agency.

The earthquake and tsunami combined to devastate many areas by liquefaction, a phenomenon that violently shakes up the soft, damp soil with water, churning solid ground into a liquid state.

Possibly 5,000 people are buried in parts of the city and its surroundings obliterated by liquefaction.

Many survivors are living in shelters made out of salvaged wood and plastic in the city and surrounding hills, where they wait and wonder what will happen to them.

Rescue teams were working with residents to try to identify where victims could be. But it’s guesswork because of how far the ground moved during liquefaction.

After a rare appeal for international assistance, Indonesia is now trying to limit foreign involvement in the disaster relief effort.

Sutopo Purwo Nugroho, the agency’s spokesman said that reconstruction and rehabilitation were scheduled to begin in early November, but did not specify how long it would take to complete.

He reiterated that the official search for bodies will end on Thursday, with mass prayers in hard-hit neighborhoods but volunteers and family members can continue searching.

Areas hit by liquefaction, he said, will be turned into parks and sports fields and memorials.

The World Bank has offered Indonesia help, including finance, in the reconstruction and rehabilitation process

Namibia Bishop at Synod: ‘we need to empower women and youth’