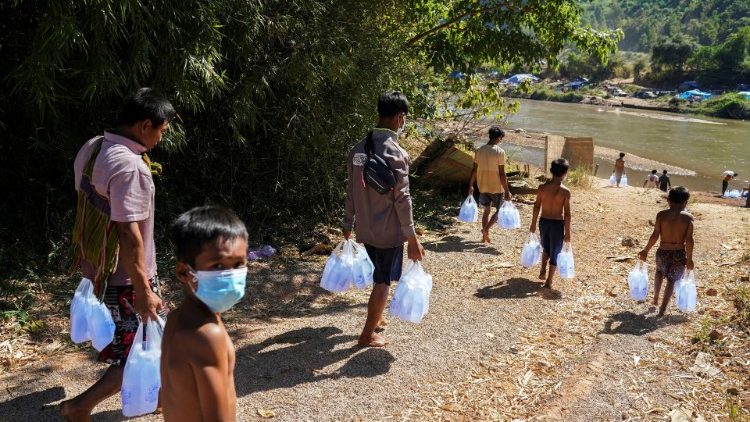 Myanmar’s Catholic Bishops wrap up their General Assembly with a final statement expressing their deep concern for the plight of civilians who bear the brunt of the country’s ongoing civil war.

As the eyes of the world are focused on the war in Ukraine, fighting and military crackdown wage on in Myanmar, where thousands of civilians continue to flee their homes and millions of them are facing hunger.

The ongoing armed conflict in the country was one of the main topics of the recent General Assembly of the Catholic Bishops’ Conference of Myanmar (CBCM), which took place on 7-10 June in Yangon, under the presidency of Cardinal Charles Bo of Yangon.

Deep concern for the plight of civilians

In their final statement, the Bishops of Myanmar expressed their “deep concern”, in particular for the plight of civilians suffering the consequences of the armed conflict calling on all sides to respect human life and dignity.

“Human dignity and the right to life can never be violated. We strongly ask for respect for life and for the sacredness of places of worship, hospitals and schools.”

According to non-governmental organizations cited by Fides news agency, more than 1,929 civilians have been killed and 11,000 arrested since the military coup of 1 February 2021, which ousted the newly reelected NDL party over unsubstantiated claims of election fraud.

Moreover, the Tatmadaw –  the Burmese army –  has continued to target churches and its institutions. Dozens of churches, including Catholic churches in the states of Kayah and Chin, have been destroyed by airstrikes and bombardments, as thousands of people, including Christians, are displaced or fleeing to neighbouring India.

According to reports from the Catholic news agency UcaNews at least 450 homes have been set on fire by the military in the historic Catholic villages of Chan Thar and Chaung Yoe in the Sagaing region over the past month or so.

In their statement, Myanmar’s Bishops call attention to the state of anxiety and the lack of security in which people find themselves, “in particular the elderly, the disabled, children, women and the sick who have to move from their places due to political conflicts in their areas.”

The Bishops also express their gratitude “to the priests, deacons, nuns, catechists and volunteers who try to support and assist civilians fleeing to safer places.”

They further encourage priests, nuns and Catholics to continue to provide humanitarian assistance to refugees and to help people who are facing unprecedented struggles and difficulties due to the current political situation, regardless of their faith or ethnicity.

Commitment for justice, peace and reconciliation

Reaffirming their commitment to “justice, peace and reconciliation”, the Bishops urge all sides to facilitate access to humanitarian aid for all those in need.

The encourage “all dioceses to build peace in the country in every possible way”, and invite the faithful “to pray constantly”, for reconciliation and peace for Myanmar, offering special Masses every first day of the month and reciting the Rosary every evening.

In conclusion, Myanmar’s Bishops’ Conference reiterates that it “stands by civilians and will continue to support the needs of people, regardless of their faith, race and ethnicity.”

Mozambican version of World Youth Day to be held in Nampula.

Archbishop Gallagher: the migration challenge must be met with solidarity