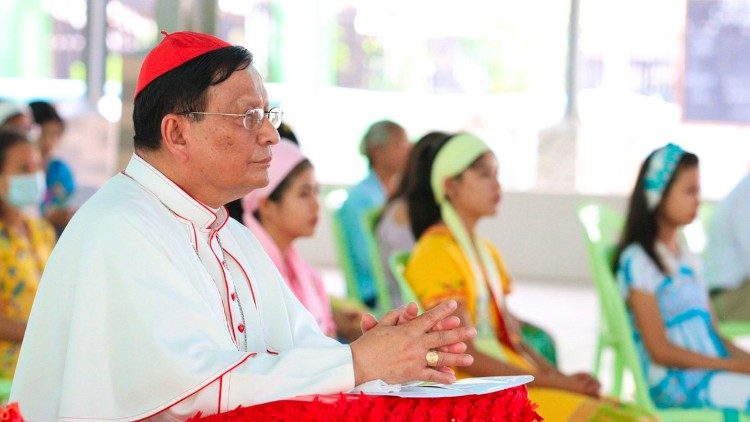 Ahead of the first anniversary of the military coup in Myanmar on 1 February, the president of Myanmar’s Catholic Bishops speaks to Vatican News to express the feeling of the people and the Church, while appealing to the junta and the international community.

As Myanmar marks the first anniversary of the military coup on 1 February, the country’s Catholic Bishops are reiterating their closeness to the suffering people, urging the Church and Christians to be “the wounded healer” and “an instrument of peace”.

“We feel your pain, your suffering, your starvation; we understand your disappointment; we understand your resistance,” Myanmar Cardinal Charles Bo of Yangon told the country’s people in a message sent to Vatican News, ahead of Tuesday’s anniversary.  “But to some who believe only in violent resistance, we say ‘there are other means’,” said the Cardinal, who is also president of the Catholic Bishops’ Conference of Myanmar (CBCM).

In the 1 February 2021 coup, Myanmar’s military, headed by Senior General Min Aung Hlaing, deposed the elected government of Aung San Suu Kyi’s National League for Democracy, imprisoning her and other elected leaders. The coup triggered widespread protests and strikes, calling for her release and the restoration of the democratic process.

The junta’s security forces responded with a bloody crackdown on opponents of the coup, killing more than 1,500 protesters and arresting over 11,800 so far, according to the latest tally by the Assistance Association for Political Prisoners (AAPP), a rights group that documents and compiles casualties under the coup.

The coup signalled the end of 10 years of reforms towards democratic rule after nearly 5 decades of harsh military rule.

Extended ‘Way of the Cross’

Cardinal Bo, who has made numerous appeals for a peaceful return to civilian rule and respect for human rights and freedom, expressed deep concern over the dire situation of the people. He described the year-long human suffering under military rule as “the extended Way of the Cross, the Garden of Eden becoming the mount of Calvary”.

According to the latest estimates by the United Nations Office for the Coordination of Humanitarian Affairs (OCHA), Myanmar’s turmoil is projected to have driven almost half the country’s 54 million people into poverty, wiping out the impressive gains made since 2005.  It is now estimated that 14 out of 15 states and regions are within the critical threshold for acute malnutrition.

Before the 1 February coup, there were already some 340,000 internally displaced people (IDP). The coup has created another some 321,000 IDPs. Huge numbers are displaced, especially in Christian areas.

Cardinal Bo, who is also president of the Federation of Asian Bishops’ Conferences (FABC), described the current situation as a time of “spiralling chaos, confusion, conflict and human agony.” With people living in fear, anxiety and starvation, “the whole of Myanmar is a war zone,” he said.

The 73-year-old Cardinal said the bishops continue to accompany their people, “advocating for humanitarian access and urging all parties towards a journey of peace and reconciliation.”

The military’s offensive against protesters has reignited old conflicts with the country’s armed rebel groups, especially in the predominantly Christian regions inhabited by the Kachin, Chin, Karen, and Kayah ethnic groups. Besides, numerous independent civil resistance groups have also sprung up in self-defence against the junta’s atrocities.

Among the regions most affected by armed conflict are the states of Chin, Kayah and Karen. Churches that have been sheltering displaced people fleeing clashes between the army and armed groups are being targeted, raided and shelled by the military. Priests and pastors are being arrested, while many unarmed civilians, including Christians, have been killed.

The conflict between the army and armed groups has led to a large number of displaced within the country and beyond its borders. United Nations experts have expressed fear the country could slide into a full-blown civil war with further drastic consequences.

Cardinal Bo lamented attacks on places of worship where people seeking shelter have been killed. The CBCM particularly denounced the massacre of at least 35 civilians, including 4 children and 2 humanitarian workers, who were burnt and killed on the eve of Christmas in the village of Mo So, in Kayah state.

Noting that Christians have “suffered heavily” under the coup, Cardinal Bo expressed the Church’s closeness to them in their “Way of the Cross”.

“But as a Church and as Christians, we follow the direction of Pope Francis,” he said. “Let us become the wounded healer, be an instrument of peace; let us light a candle of hope amidst the frustrating darkness.”

To the junta – respect freedom and rights

Addressing the military leadership, the president of Myanmar’s bishops assured them that the Church is committed to the greater good of the people and for the peaceful resolution to all issues.

“We have constantly urged for dialogue, the release of the detained, greater freedom of expression and respect for basic human rights of all,” the Cardinal said, urgently calling for humanitarian access to the affected millions.

Volunteers of the Covid-19 facility of the Church of Epiphany, Yangon.

He lamented that after the “initial bout of interest, Myanmar seems to have disappeared from the radar of the world.”

He thus urged the international community to remember Myanmar and help her in her struggle for peace-making. This, he said, they can do particularly by stopping the supply of weapons and granting greater humanitarian access to the people.

Some 88 per cent of Myanmar’s 53 million population is Buddhist.  Christians form 6.2 per cent (including 750,000 Catholics), with Muslims making up 4.3 per cent and the rest are Hindu and animist.  Despite the tiny minority Catholic community, the Catholic Church commands great respect.

Cardinal Bo is one of the 3 co-patrons of the Myanmar chapter of Religions for Peace, a non-profit international coalition of representatives from the world’s religions dedicated to promoting peace and harmony through dialogue and cooperation.

In August last year, when he called for a national prayer campaign for at 2 weeks, he appealed to followers of all religions to pray in order to “melt the hearts of all people and bring healing, peace and reconciliation”.Listen to Cardinal Charles Bo

In his message for the anniversary of the coup, Cardinal Bo lamented the “deep crisis marked by a visceral threat to life and livelihood”, saying, “Enough is enough”.  It is “time for healing, the people and the country cannot bear any more pain and violence.” Yet in the spirit of Christian hope, Myanmar’s senior churchman expressed prayerful hope “that all stakeholders take the path of peace and reconciliation”.  “Peace is possible, peace is the only way,” he stressed.

Pope Francis, who visited Myanmar in November 2017, lent his voice several times to the chorus of appeals from around the world for a quick and peaceful resolution to Myanmar’s crisis.

His first appeal came soon after the coup, when on 7 February 2021 at the Sunday midday ‘Angelus’ prayer in the Vatican, he fondly recalled his 2017 visit, assuring the people of his spiritual closeness, prayers and solidarity.  And he prayed that  “those who have [positions of] responsibility in the country will place themselves with sincere willingness at the service of the common good, promoting social justice and national stability, for a harmonious, democratic coexistence,” the Pope said, inviting the faithful to a moment of silent prayer”.

On another occasion, he was deeply moved by the stirring testimony of 45-year-old Xaverian nun, Sister Ann Roda Nu Tawng, who on 28 February dared to approach a battalion of armed security forces in Myitkyina, the capital of Kachin state. Then falling on her knees, she pleaded with folded hands with them not to harm the peaceful protesters sheltering in the clinic where she was serving.

“I too kneel on the streets of Myanmar and say: stop the violence!” Pope Francis said, in an obvious reference to the nun. “I too extend my arms and say: let dialogue prevail!” the Holy Father said, lamenting the many lives lost, especially those of the young.

In his Urbi et Orbi Christmas message, the Pope prayed for the country, where “intolerance and violence not infrequently target the Christian community and its places of worship, clouding the peaceful countenance of that people.”

And more recently, addressing the diplomatic corps in the Vatican on 10 January, he said, “Dialogue and fraternity are all the more urgently needed for dealing wisely and effectively with the crisis which for almost a year now has affected Myanmar.”

“Its streets, once places of encounter, are now the scene of fighting that does not spare even houses of prayer,” the Holy Father lamented.

Dominican priest killed while in the confessional in Vietnam