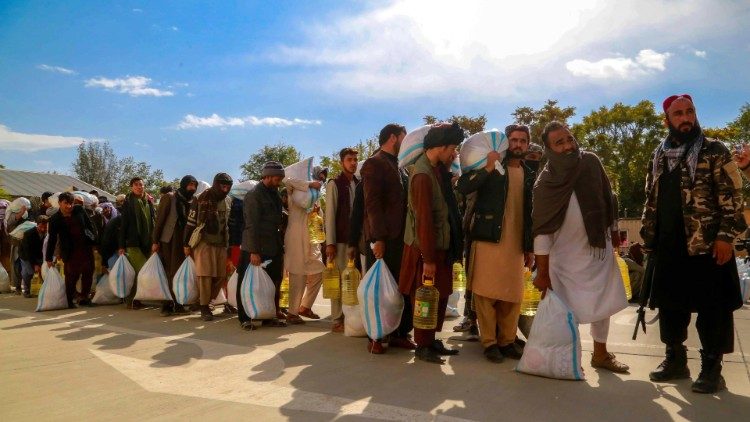 In its latest situation report on Afghanistan, OCHA estimates 55 percent of the population are in crisis or emergency levels of food insecurity.

As isolated clashes and violence continue to plague Afghanistan under the Taliban rule, the United Nations says nearly 23 million people, or 55 percent of the population, are estimated to be in crisis or experiencing emergency levels of food insecurity between now and March of next year.

In its latest situation report released on November 3, the UN Office for the Coordination of Humanitarian Affairs (OCHA) shows concern about “conditional humanitarianism” or attempts to “leverage” humanitarian assistance for political purposes. Donors are also asking that transactions and other activities required for humanitarian operations be excluded from the scope of sanctions, to allow these activities to continue without impediment.

The Afghanistan Flash Appeal, which targets 11 million people with aid through the end of the year, seeks $606 million and is currently 54 percent funded, with a shortfall of some $276 million.

Since 1 September 2021, the UN agencies and their partners have reached 48,383 children with community-based education activities, supported 82,761 people with emergency shelter and non-food items (NFI), and provided 4.1 million people with food assistance. About 580,050 people got primary healthcare and 85,623 children under five received treatment for acute malnutrition.

According to the Inter-Cluster Coordination Team (ICCT), which functions under the OCHA, 40 years of war, recurrent natural disasters, chronic poverty, drought, and the Covid-19 pandemic have devastated the people of Afghanistan. The recent upheaval has only exacerbated needs and further complicated an extremely challenging operational context.

The situation report says that even prior to the events of 15 August, when the Taliban took full control of Afghanistan, the humanitarian situation in the country was one of the worst in the world. By the mid-year mark, nearly half of the population – some 18.4 million people – were already in need of humanitarian and protection assistance in 2021. Protection and safety risks to civilians, particularly women, children, and people with disabilities were also reaching record highs.

The OCHA points out that the country is currently facing the second drought in four years and the worst of its kind in 27 years. The recently updated Integrated Food Security Phase Classification (IPC) analysis shows the food security situation has further deteriorated with worrying implications for the winter lean season ahead.

An estimated 22.8 million people, or 55 percent of the population, are expected to be in crisis or emergency levels of food insecurity (IPC 3+) between November 2021 and March 2022. This is an increase of nearly 35 percent from the same season last year (16.9 million). No provinces have been included under IPC 1 and 2 during the projected period till March. Some 9 million people are projected to be in IPC 4 – the highest number in the world.

The Integrated Food Security Phase Classification (IPC) is a set of analytical tools, and processes, to analyse and classify the severity of a food security situation according to scientific international standards. The IPC scale categorizes the severity of acute food insecurity into 5 phases:  minimal (1), stressed (2), crisis (3), emergency (4), and famine (5).

UN agencies, the Food and Agriculture Organization (FAO) and the World Food Programme (WFP), had earlier raised an alarm over the critical food security situation in Afghanistan. Their joint-IPC report of October 25 estimated that more than 1 in 2 Afghans will face IPC levels of 3 or 4 of acute food insecurity during the November to March lean season.

This is the highest number of acutely food insecure people ever recorded by the UN during 10 years of conducting IPC analyses in Afghanistan, which the two agencies said requires an urgent international response to prevent a humanitarian catastrophe.  “We cannot wait and see humanitarian disasters unfolding in front of us – it is unacceptable”, FAO Director-General QU Dongyu said.

“Afghanistan is now among the world’s worst humanitarian crises – if not the worst – and food security has all but collapsed”, WFP Executive Director David Beasley commented on the IFC report. “This winter”, he said, “millions of Afghans will be forced to choose between migration and starvation unless we can step up our life-saving assistance, and unless the economy can be resuscitated.” “We are on a countdown to catastrophe and if we don’t act now, we will have a total disaster on our hands”, Beasley said.

FAO has begun the autumn season wheat seed and fertilizer distribution campaign in the east of the country. Technical training sessions on agricultural best practices are also planned.  The agency expects to reach nearly 140,000 people in the provinces of Nangarhar, Kunar, Laghman, and Nuristan.