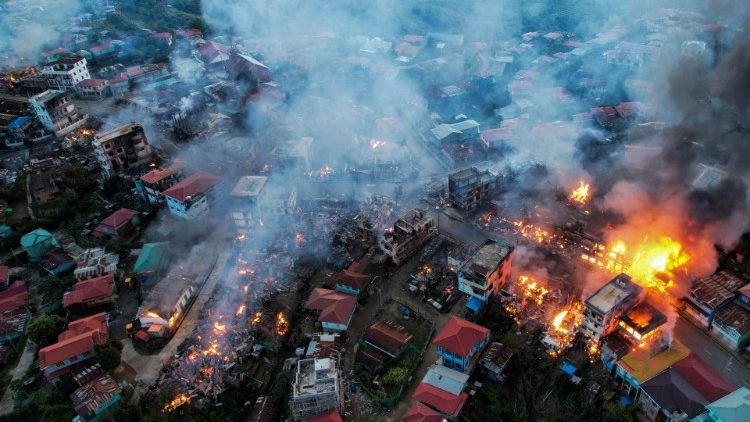 More than 500 Myanmar and international civil society organizations have appealed to the United Nations to halt the onslaught of Myanmar’s junta in the western state of Chin, which has been in the forefront of the people’s defiance of the military coup and its campaign of terror.  The call came in a statement that Human Rights Watch (HRW) released on Thursday on behalf of 521 international and domestic organizations calling on the world body to adopt a resolution and act before the offensive expands in the embattled state.

“We, the undersigned 521 Myanmar, regional and international civil society organizations, call on the UN Security Council to urgently convene a meeting on the escalating attacks in Chin State, and address the rapidly deteriorating humanitarian, human rights and political crisis in Myanmar,” the HRW statement said. While calling on the UN Security Council to adopt a resolution to consolidate international action to stop the military’s violent assault against the people of Myanmar, the rights groups also demanded a global arms embargo to stop the flow of weapons to the junta, including dual-use goods, and refer the situation in the country to the International Criminal Court.

The rights groups pointed out that many of their civil society organizations have “repeatedly and vehemently” called on the UN to act urgently, but the Security Council failed to take any effective actions beyond statements.  “As the offensives escalate in Chin State,” they said, “the UN Security Council must act before it is too late.”   “It must convene an urgent meeting on the escalating attacks in Chin state and the overall deepening political, human rights and humanitarian crisis as a result of the Myanmar military leaders’ search for power and greed that has caused immense suffering.”

The civil society groups noted that in the 9 months since the February 1 military coup, 1,236 people have been killed and 9,667 arbitrarily detained as of November 3, 2021. While continuing its violent assault throughout Myanmar, they said the junta has recently deployed troops and increased its attacks against civilians in Chin State, Sagaing and Magwe Regions in north-western Myanmar, while continuing its attacks in Karenni, Karen and Shan states.

Chin State has been facing the brunt of the junta’s offensive, including the use of fighter jets and heavy artillery against civilians, with hundreds arbitrarily detained and dozens killed. In a report on Wednesday, HRW said that new satellite thermal anomaly data it analyzed confirmed images and videos streaming out of Myanmar’s Chin State showing towns once again on fire.  Active fires were detected in the state’s Thantlang town, whose numbers have grown over a 12-hour period.

Prior to this most recent surge in attacks, approximately 10,000 residents of the town had already fled their homes as the military junta indiscriminately shot into homes and set off fires by shelling in September.  The military is facing a growing number of armed civil defence forces that have sprung up to protect the local people.

The international humanitarian organization Save the Children said in a statement on October 29 that their office in Thantlang had been damaged, and raised concerns that the fires risk “destroying the whole town and the homes of thousands of families and children”.

Amid the heavy military buildup of weapons and troops in Chin State, the spokesperson for the UN High Commissioner for Human Rights urged “the international community to speak with one voice, to prevent the commission of further serious human rights violations against the people of Myanmar”.

Tom Andrews, the UN Special Rapporteur on the situation of human rights in Myanmar warned of greater human rights catastrophe and further mass atrocity crimes amid the deployment of tens of thousands of troops warning, “These tactics are ominously reminiscent of those employed by the military before its genocidal attacks against the Rohingya in Rakhine State in 2016 and 2017.”

The civil society organizations maintain such indiscriminate attacks against civilians and humanitarian organizations are violations of international law and constitute war crimes.

“We should all be prepared, as the people in this part of Myanmar are prepared, for even more mass atrocity crimes. I desperately hope that I am wrong,” Andrews told the UN General Assembly on October 22.