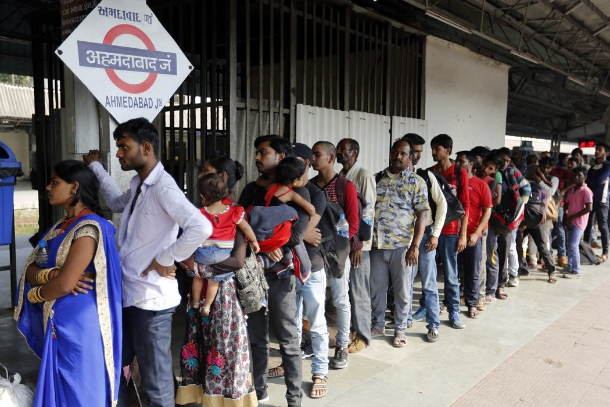 Thousands of internal migrant workers have fled communal attacks in Gujarat, Prime Minister Narendra Modi’s home state in western India, sparked by the alleged rape of a 14-month-old baby girl.A man from another state has been arrested over the Sept. 28 attack on the infant.Despite calls for calm, an estimated 20,000 internal migrants had since left the state, according to a group involved in internal-migrant worker welfare, Uttar Bharatiya Vikas Parishad.Human rights’ groups and Catholic Church leaders called for more concerted action by law enforcement authorities to check the violence.State home minister Pradeepsinh Jadeja countered that police had detained some 450 people for attacking workers from outside the state.Strife erupted in India’s second most industrialized state as news spread of the alleged rape of the toddler about 100 kilometers from Gujarat state’s commercial capital, Ahmedabad.Groups of Gujarati speaking locals began to beat up internal migrants, most of whom work in textile and other factories as well as in brick kilns, the transportation sector and agriculture.Most migrants speak Hindi and come from states such as Bihar, Uttar Pradesh, Chhattisgarh, Jharkhand, Odisha and Rajasthan.Archbishop Thomas Macwan of Gandhinagar said it was unfortunate that thousands of people who had nothing to do with the alleged rape had been driven from the state.Archbishop Macwan said there had been earlier rape cases in which those accused were outsider Hindi-speaking laborers, so strong feelings already existed in the community and the latest violence was spontaneous.The archbishop wanted the state government, under Modi’s pro-Hindu Bharatiya Janata Party (BJP), to act more decisively rather than accusing the opposition Congress party of fomenting communal tensions.The state government has been blaming Congress politician Alpesh Thakor and his  activist organization, Gujarat Kshatriya-Thakor Sena (Thakor Army in Gujarat), for the violence.Chief Minister Vijay Rupani said the Congress Party should act against “its own members who incited violence.”The state leader’s critics say the conflict was exacerbated Oct. 8 when Rupani said that locals should be given preference for 80 percent of all the employment.Congress leaders on the other hand charged the Gujarat government with inaction. They also questioned what they described as Modi’s silence on the communal violence.

Joseph Dias, general secretary of the Mumbai-based Catholic Secular Forum, viewed the wave of attacks as pre-planned by “vested interests”.”The exodus of migrant workers shows that the BJP government is not for the disadvantaged sections of people,” Dias said.”This is nothing but an attempt to spoil harmony in the country.”Father Jaison Vadassery, secretary of the Indian bishops’ labor office, said the violence came from a fear that migrants would render local people unemployed.India has no system to regulate internal-migrants’ movements and they are treated as second class citizens, the priest said.Officially India has some 309 million internal migrants.Nearly nine million people migrate from one state to another each year, according to the latest government records, which is double what was recorded in 2011, Father Vadassery added.