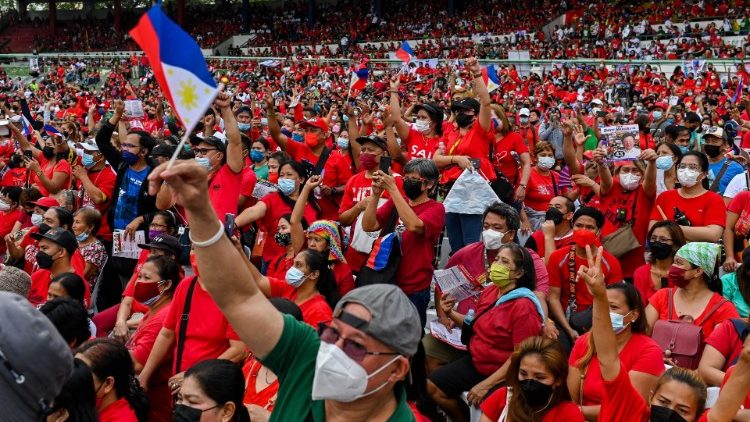 Some 67.5 million Filipinos are eligible to vote in the 9 May election for a president, vice president, about 300 lawmakers and roughly 18,000 local government positions.

In the Philippines, the clergy of the Manila Archdiocese will lead a “penitential walk” on Thursday, 17 February, to pray for the voters as they choose the country’s next leaders in the general election in May.  They will be joined by other priests from Manila’s suffragan dioceses and religious men and women from different congregations.

Some 67.5 million Filipinos, including 1.7 million overseas, are eligible to vote in the 9 May election for a president, vice president, about 300 lawmakers and roughly 18,000 local government positions.

“We ask our fellow Filipinos to discern their choice well and prefer leaders who embody and promote the values of the Kingdom of God,” the archdiocese said in a statement on its website.  The clergy pledged to pray for the people as they choose their next leaders.

The penitential march will kick off with a morning Mass and homily by Cardinal Jose Advincula of Manila at the Cathedral of the Immaculate Conception.   After the Mass, the penitential walk will proceed from the cathedral to the GomBurZa memorial marker at the Luneta Park, and then to the Shrine of Nuestra Señora de Guia in Ermita.

The archdiocese explained it chose the date 17 February saying it marks the 150th anniversary of the martyrdom of Fathers Mariano Gomez, Jose Burgos, and Jacinto Zamora, collectively known as GomBurZa.  On that day in 1872, the three diocesan priests were strangled to death after being framed by the Spanish colonial government on false charges.

The gruesome execution is believed to have aroused the ideals of nationalism and independence among the Filipinos which ultimately is said to have led to the birth of the nation.

Manila Archdiocese said they are doing the penitential march in line with the pious Filipino sense of penance.  “For us Filipinos,” it said, “doing acts of penitence or sacrifice is never just for oneself, but always intercessory, that is, in behalf of others and in solidary with others,” it said.  “As a clergy, we shall make this act of sacrifice not only for our personal piety but also for the sake of our people and in communion with our people.”

Reiterating the social doctrine of the Catholic Church, the Archdiocese of Manila said that as priests and religious, they preach nothing else but the Gospel of our Lord Jesus Christ, the Good News of the Kingdom of God, a kingdom that prizes communion, truth, justice, and peace.  It is the duty of every Christian to take part in building and renewing the nation, giving the best of ourselves in the service of the common good.  Love for one’s country, the clergy said, is not opposed to nor is an accessory that is juxtaposed to the love of God.  Rather, “true heroism is borne of holiness, and true holiness issues into service for justice.”

The country’s presidential candidates on 8 February kicked off a 3-month long election campaign, making lofty promises to rebuild the shattered economy, wipe out corruption and uplift the lives of a pandemic-weary public.

Frontrunner Ferdinand Marcos Jr, the son and namesake of the late dictator who ruled the Philippines for two decades before his 1986 overthrow, repeated his message of fostering unity to overcome the economic and pandemic crises.  Joining him as his running mate is Davao Mayor Sara Duterte-Carpio, daughter of outgoing President Rodrigo Duterte, and the favourite to win the vice presidency, which has a separate election.

Coming next is Vice President and opposition leader, Leni Robredo, who narrowly beat Marcos in the 2016 vice presidential contest but trails him in polls for the top job. She promised her supporters better healthcare and an honest and caring government.

Others vying for the country’s top job include Manila mayor Francisco Domagoso, Senator Panfilo Lacson and retired boxing superstar Manny Pacquiao, who is promising to improve the healthcare system, eradicate corruption, spur economic growth and provide housing for the poor.

Pope prays for priest murdered in the DRC