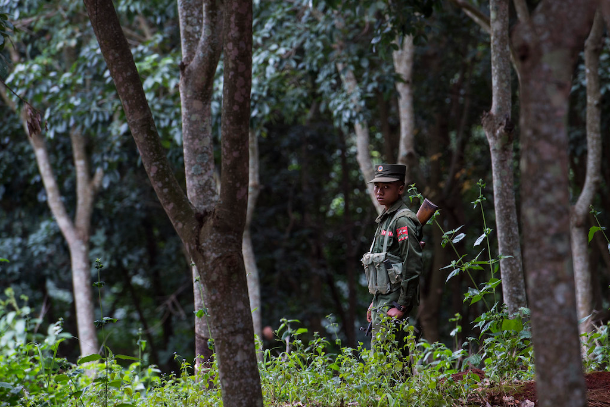 Lahu Baptist leaders have demanded China-backed militia release forcibly recruited students and open sealed-off churches in Shan State near Myanmar’s border with China.Rev. Lazarus, general secretary of the Lahu Baptist Convention in Kyaing Tong, said they held a meeting with Lahu political parties, and cultural and women’s associations, and sent a letter to the Wa army liaison office in Lashio in northern Shan.In the letter dated Oct. 22, they called on the United Wa State Army (UWSA) to set free 41 students from Bible school who were recruited, allegedly against their will, and reopen Lahu Baptist churches while also returning all the property the army seized from the Bible school.”We have made the demands as our Christian brothers and sisters face restrictions on worshipping and are being deprived of their right to religious freedom in the Wa hills,” Rev. Lazarus told ucanews.com.He said the group is waiting for a reply from the UWSA, adding it has pledged to take more steps if the militia fails to respond to its calls.”Things are not improving and Christians in the Wa hills remain restricted from reading bibles and conducting prayer meetings in their homes,” the Lahu Baptist leader said.Twelve pastors from the Lahu Baptist Convention have been kicked out of the region and have returned to Kyaing Tong in eastern Shan, he said.Two Salesian priests, eight Catholic nuns from the Missionary Society of St. Paul and nine lay teachers were also expelled from late September to mid-October by the UWSA.The UWSA grew out of the Communist Party, which destroyed churches, detained pastors and closed religious schools.The UWSA announced that all churches in the region built after 1992 were being illegally constructed. Only those established between 1989 and 1992 have been accepted as having a legitimate right to stay.The Wa army has banned the building of new churches and requires that priests and other parish staff be locals not “outsiders.”The UWSA has also prohibited religious teaching at schools in the Wa region, while its functionaries are forbidden from joining religious organizations.The militia’s leadership has moreover pledged to punish local administration cadres if they support missionary activities.Some Wa officials and their Chinese allies believe a number of Christian groups contain members aligned with U.S. intelligence services.The Wa region is home to many ethnic groups including the Wa, Kachin, Ta’ang, Lahu, Lisu, Kokang and Shan. They observe Christianity, Buddhism, animism, spirit worship and Islam. Christians comprise around 30 percent of the estimated 450,000 Wa population.