Julian Paparella: what I’m going to tell the Synod of Bishops 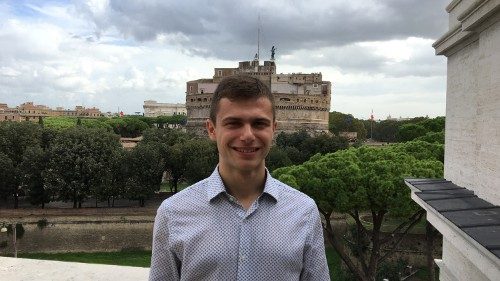 We’ve heard the presentation and listened to the General Secretary explain its aims, we know that the over 300 Synod Fathers gathered in the Vatican Synod Hall will produce a final document, and that there are 34 young people who will have the precious opportunity to address the Synod on “Young People, the Faith and Vocational Discernment” and even have an impact on its outcome. But who are they?  What are their expectations for the next three busy weeks? What does it feel like for them to have been chosen to represent their peers and raise new issues at such a crucial event for the life of the Church?

I had a word with 25-year-old Julian Paparella from London Diocese in Ontario, Canada.   He followed a degree in biology with a Masters in Theology at the Institut Catholique de Paris and is currently working as Campus Minister at McGill University in Montreal helping accompany students in their faith.

Julian’s involvement with the Canadian Catholic “Salt & Light” TV where he has interned and his experience at the Catholic Institute in Paris were probably the reason, he said, his name came to the fore when the bishops were asked to select a candidate.

“I was surprised and I hope I’ll continue to be surprised” he said as he begins this experience, “a great gift” during which he has been asked to serve the Universal Church.

A voice for young people

“I’m just hopeful that I will be able to serve in this capacity, as a voice for young people, trying to make the Synod Fathers,  the Holy Father, more sensitive to the current realities and needs of young people”.

Julian stressed that he will not be presenting his own views and opinions, but “the questions and the needs of young people, their concerns, their questions of faith, their lived reality so that the Church can better accompany young people of today”.

A perennial need to re-adjust

Julian spoke of what he sees as a constant need for the Church to continue to re-engage with young people and really be in their midst pointing out that those needs and concerns will constantly evolve.

“With every new generation there will be a need to re-evaluate, re-understand what young people are living”, how can the Church be better present to walk with them towards Jesus, he said.

He pointed out that there certainly is a need right now in the Church for re-adjustment and expressed his appreciation for the fact that the Pope sees that and has responded with something as significant as a Synod of Bishops but, he said “I don’t think that need will ever go away”.

Jesus Christ will never be irrelevant

Reiterating his deep belief that the Gospel will never be irrelevant for young people, Julian recalled the words of Saint Pope John Paul II when he said “Jesus Christ is the answer to the question posed by every human heart”

We all thirst for Jesus Christ, he said, and  “whether or not they know it, all young people are thirsting for his Love.” And so, he continued, the question is: “how does the Church become an instrument and a vehicle by which young people are able to encounter this love of God”.

The only questions of possible irrelevance, Julian said, regard the ways and the means with which the Church is reaching or not reaching young people.

Asked whether he feared the current clerical sex abuse crisis risks creating a breakdown in communication between Church and young people, Julian revealed that in his work at the Newman Center in Catholic Chaplaincy this question was raised at the beginning of the year.

“My impression and my approach would be that the lasting impression of young people towards the Catholic church is not primarily what they read in blogs or see in the newspaper”, rather what is their experience of Catholic community in parishes, in communities, in youth groups, and how does the Church help them encounter Jesus: “that’s what touches them most profoundly”.

Of course, he said, what we read impacts the public image of the Church, but young people are not going to Church because of its perfect public image: they are looking for Christ and if the Church helps them in that, everything else will fall into place.

Young people, Julian explained, are not going to ignore grave events such as these, but for someone who has found God in the church, a scandal such as this  is not something that is going to break their faith “especially if they see the Church is doing something to address in a serious way these crises”.

Julian’s intervention at the Synod

Giving us a sneak-peek of what he will be saying during his intervention in the Synod Hall, Julian revealed he will be speaking of the need for people in the Church to trust young people: “not to see us in need of correction,”  but for the need that pastors, religious, laypeople to look on young people with love, and to believe there are good things in the lives of young people: “young people can teach the Church something”.

He was passionate in reiterating his belief that the Church must empower young people “helping them become witness and not just recipients of faith”.

Expectations for the Synod

Pope Francis: Synod is a time for sharing