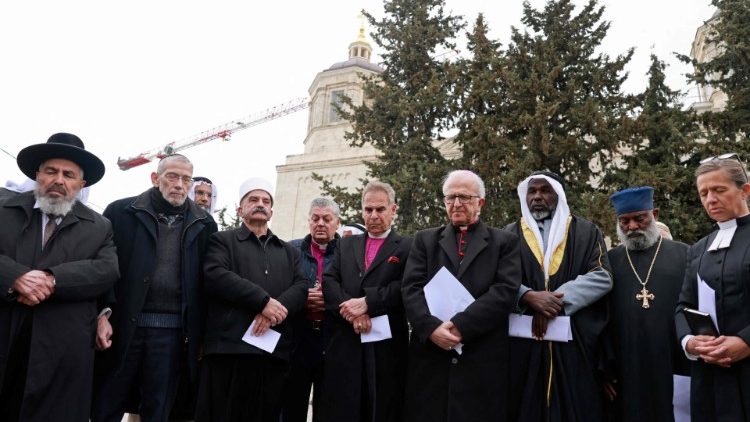 Christian businesspeople and adherents of various religions are teaming up to host an online prayer meeting for world peace on 21 June in the face of global tensions and the suffering caused by war.

“This historical moment, which represents a great challenge for the future of all humanity, drives my thoughts to the biblical event of the ‘crossing of the Red Sea’. Just as Moses pointed the way toward salvation, may the leaders of all religions and religious communities today begin to work together to reach the land promised by God: Peace and Development.”

The guiding principle of the interfaith prayer was offered by a collaboration between Prof. Azza Karam, Secretary General of Religions for Peace, and Nelida Ancora.

The event is set for Tuesday, 21 June, at 4 PM Rome time. Click here to register for the online Interfaith Prayer for World Peace.

Ms. Ancora serves as the Delegate for Ecumenical and Interreligious Dialogue at UNIAPAC, an ecumenical organization that promotes Christian Social Thought within the business world.

UNIAPAC teamed up with Religions for Peace, an international coalition of religious leaders seeking to deal with the world’s most pressing issues, to host the event. It was developed in coordination with Prof. Ulrich Hemel, Director of the Global Ethic Institute, and Fr. Martin Maier, SJ, UNIAPAC’s spiritual advisor.

The interreligious prayer for peace comes as the world faces a host of local and global conflicts, which Pope Francis says have sparked “a world war fought piecemeal.”

“The world is at war,” said Pope Francis in an interview with La Civiltà Cattolica released on Tuesday. “For me, today, World War III has been declared. This is something that should give us pause for thought. What is happening to humanity that has had three world wars in a single century?… This is a calamity.”

The Pope was referring in part to Russia’s invasion of Ukraine, which he also remembered on Wednesday, urging everyone to pray for those who suffer from that war and many others.

Tuesday’s interfaith prayer for world peace falls in line with Pope Francis’ desire for people of all religions to join in spirit to pray for an end to conflict and war.

Just one month ago, Religions for Peace and UNIAPAC issued a joint statement to deplore the war in Ukraine, which “represents a critical moment for humanity to accept its collective responsibility.”

“‘Where is your brother Abel?’ God asked Cain. ‘I don’t know. Am I my brother’s keeper?’ Cain replied. Our answer today is an emphatic ‘YES!’. We all are our brother’s keeper. Each of us is called to guard and promote the life of our brothers and sisters,” read the statement.

UNIAPAC and Religions for Peace said the solution to humanity’s conflicts is an embrace of human fraternity, which “offers an alternative paradigm to reckless competition that leads to war.”

“We all must contribute to the common good, acting in the present but with an outlook towards the future,” urged the joint statement.

The interfaith prayer for world peace—according to Ms. Ancora—seeks to offer a concrete response among all believers to help humanity cross the Red Sea of conflict toward the peaceful shores of fraternity and development.

‘The Eucharist is my strength’: the story of Sr Alicia Torres