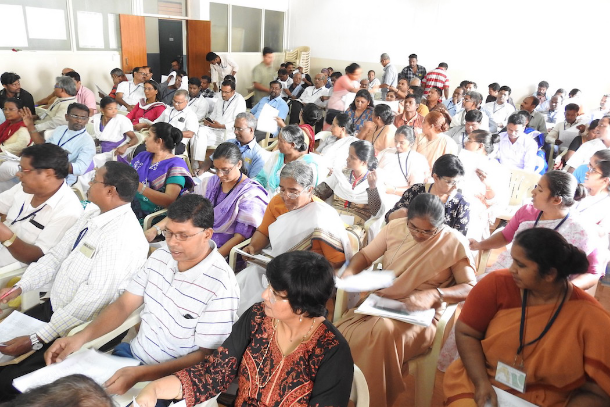 More than 100 voluntary church and other groups in India have drafted a so-called people’s manifesto focussed on poverty alleviation as the nation heads towards national as well as various state elections.It was formulated Oct. 6 at the end of a four-day program in southern Bengaluru city organized by Lok Manch, a secular forum of voluntary agencies initiated by Jesuits in Social Action (JESA).”The people’s charter demands basic facilities like potable water, food and roads for the most poor, and it will be given to all political parties,” said Father Sunnibhai (only one name), national coordinator of the forum.The Jesuit said the draft manifesto would be discussed at the grassroots and finalized according to local needs.The idea is that people would give it to election candidates of all parties seeking their vote, the priest said.Father Sunnibhai told ucanews.com that even seven decades after India become an independent nation, widespread poverty remained, with many people lacking adequate food, drinking water, educational opportunities and health care.Voters needed to boldly challenge political leaders and demand protection of their rights, Father Sunnibhai said.The Lok Manch forum was initiated two years as a secular platform without any affiliation to religious or political ideologies.The manifesto deals with tribal people’s right to forests, land and water sources as well as a need to strengthen legal protections to stem violence against tribal people and socially poor Dalits, formerly known as untouchables.The draft charter also seeks proper implementation of a law that guarantees a minimum 100 days of employment to each rural household annually as well as more funding for welfare and other services for villagers.Father Xavier Soreng from Jharkhand, a tribal-dominated central Indian state, said the four-day program was inspiring and thought-provoking.The forum has links with some 300,000 families in 12 of India’s 29 states.Father Sunnibhai said the draft charter would also be promoted during various upcoming state election campaigns, including in Rajasthan, Madhya Pradesh and Chhattisgarh, which are currently ruled by Prime Minister Narendra Modi’s Bharatiya Janata Party (BJP). The state November-December polls are seen as curtain raisers ahead of national elections due in May 2019. Rajasthan, Madhya Pradesh and Chhattisgarh states have all reported atrocities against Christians by hard-line Hindu nationalist forces and have framed laws to make religious conversions difficult among tribal people and members of poor castes