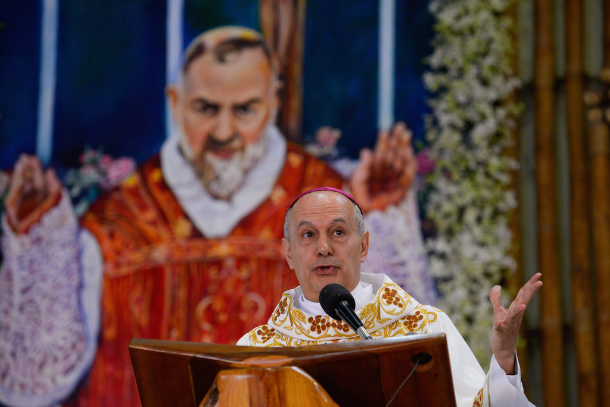 Thousands of Filipino Catholics, pilgrims and devotees welcomed the heart relic of Italian saint Padre Pio of Pietrelcina as it arrived in the town of Santo Tomas in Batangas province on Oct. 6.This marked the fourth country the relic has been sent to so far. It was accompanied by a group of Filipino devotees and two Capuchin friars from Italy.The relic, which will stay in the country for a total of 20 days, was previously taken to the U.S. for 10 days and Argentina for five days.Father Joselin Gonda, rector of the National Shrine of St. Padre Pio, estimated the number of people who welcomed the relic in Santo Tomas at about 30,000.Archbishop Gabriele Giordano Caccia, papal nuncio to the Philippines, described the saint as a model of “completely trusting in God and His will for our lives.””He understood that there was no reason to worry,” said the prelate as he urged Filipinos to learn from the example of Padre Pio, who was “childlike, loving, and pure.”Archbishop Caccia told those who attended the special Mass on Oct. 6 to “grow in confidence in God.””Through our prayer, we can deepen our relationship with Him and learn to find comfort, peace and joy in Him even during times of hardship,” said the prelate.Noting the sick people who went to see the relic hoping for a miracle, Archbishop Caccia said, “Let Padre Pio’s loving heart assure you that you are not alone in your suffering.””You are united with the sufferings of Christ, which always lead to the Resurrection, our greatest hope and consolation,” he added.The relic was taken to Manila from Batangas on Oct. 7 for a three-day visit, after which it was due to make a tour of the provinces.From Oct. 9, Manila Cathedral will be open around the clock while the relic resides in the church.Born on May 25, 1887, Padre Pio is one of the most popular saints in church history.In life, he is said to have carried the stigmata — the wounds of Christ that miraculously appeared on the saint’s body — although this has been disputed by an Italian historian. He is also remembered for allegedly having performed “bilocation,” or appearing in different places at one time