I Served Nigeria To The Best Of My Ability, Says Seiyefa As Bayelsa Honours Him 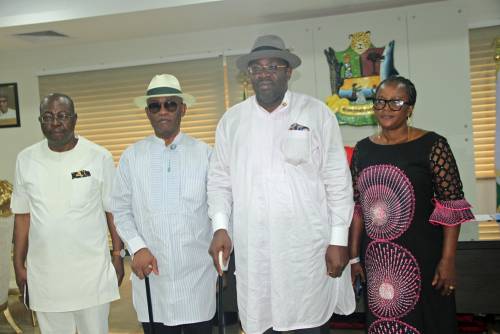 Matthew Seiyefa, the former acting Director General of the Department of State Services (DSS), has said he served Nigeria to the best of his ability while in service.

He has also expressed determination to serve his home state.

He stated this at a reception in his honour held at the Bayelsa Government House, on Thursday.

Seiyefa worked at the DSS for 34 years before his retirement in September 2018. He was appointed the acting DSS boss by Vice-President Yemi Osinbajo after the sack of Lawal Daura for his culpability in the invasion of the National Assembly premises by DSS operatives in August 2018.

He thanked the Governor and people of Bayelsa for the honour.

He said: “I thank the Governor for proving leadership for all our people. Our people needed leadership and he provided it. I have served Nigeria to the best of my ability. I will pray to serve my people, with all my energy.

“We will collectively do our bit to contribute to the development of our state.”

Seriake Dickson, Governor of Bayelsa State, described Seiyefa as a great ambassador of the Ijaw nation and commended the former security boss for rising to the pinnacle of his career through “sheer commitment, dedication to duty and hard work while in service”.

The Governor restated the decision of the state government to organise a formal state banquet for the retired acting DSS DG, in appreciation of his superlative performance in adding value to the society in his chosen career.