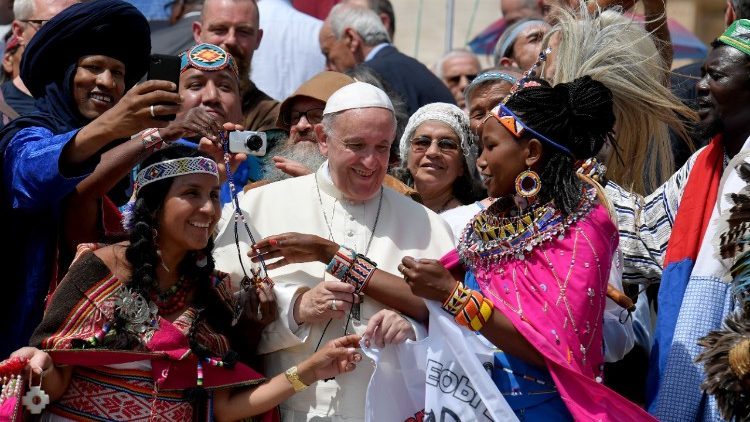 Speaking on behalf of the Holy See’s Permanent Observer, Archbishop Bernadito Auza, First Counsellor Monsignor Tomasz Grysa expressed satisfaction over significant progress in promoting and protecting the rights of indigenous peoples, particularly mentioning the adoption of the  Universal Declaration of the Rights of Indigenous Peoples.   However, he said the environmental, cultural and spiritual patrimony of many indigenous populations remains under significant threat.

The First Counsellor lamented that at the local and national level, both economic and ideological colonization, imposed under the banner of so-called progress, continue to be carried out without concern for the human rights of indigenous peoples or for the environment in which they live.

Msgr. Grysa said this trend is particularly apparent in the Amazon basin, where new forms of mining and the extraction of valuable minerals and other resources by large corporations and business interests have led to devastating environmental degradation and deforestation, as well as the displacement of persons.

“Many seemingly well-intentioned land conservation policies and movements that intend to protect the natural environment and preserve biodiversity,” he said, “have led to the disruption of local economies and of the lives of the indigenous peoples who live there.”

Without access to their own land, Msgr. Grysa pointed out, indigenous peoples, especially the young, are often forced to migrate, in search of alternative forms of employment and education.  Many of them are forced into precarious situations of poverty and vulnerability, and face discrimination and difficulty in finding work.

Indigenous lands not for exploitation

Msgr. Grysa called for breaking loose from the pattern of behavior that views the Amazon and other resource-rich regions of our world as inexhaustible sources of wealth, simply to be exploited.

Conservation and the protection of the natural environment, he said, should take into consideration the rights and livelihood of the indigenous peoples who call those regions home.

Msgr. Grysa urged that the indigenous be the principal partners in every deliberation that directly affects them.  This includes the right to maintain their own institutions and to participate in the decision-making processes of the State and of other actors. This, he said, also means giving preference to those beneficial initiatives that indigenous communities and organizations are already undertaking.

This, the Holy See official said, is an expression of our strong support for the right of all indigenous peoples to self-determination.

Msgr. Grysa said they must also be helped to preserve and defend their immense cultural reserve and living traditions.