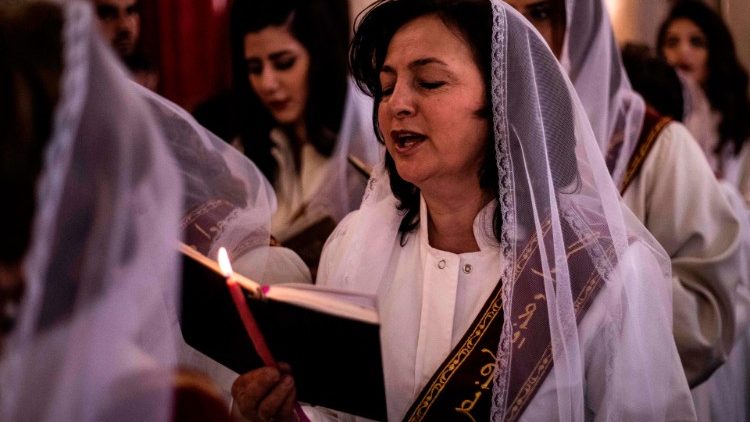 “Solidarity with persecuted and oppressed Christians in our time” is the initiative of the German Bishops’ Conference that began in 2003. To this end, a Day of Prayer is held each year on December 26, the feast of the first Christian martyr, St. Stephen, to focus on a particular part of the world where Christians are discriminated against and harassed.

The Catholic bishops of Germany have dedicated their next Day of Prayer on December 26 for the persecuted and oppressed Christians of Syria and Iraq, according to the website of the German Bishops’ Conference.

“The situation of Christians remains worrying both in Syria and in Iraq. Indeed, even after the military victory over the Islamic State, the faithful are still exposed to many dangers and persecutions,” said Archbishop Ludwig Schick of Bamberg, president of the Commission for the Church in the world.  “The terror of the Islamic State,” he pointed out, “has destabilized the region in a long-term and dramatic way.”  “The brutal violence of the Islamists has forced many Christians to flee but,” he noted, “at least one Christian minority has stayed.”  In the midst of ethnic, religious and political tensions, he said, the community “faces the great challenge of finding its place in Syria, destroyed by civil war, and in Iraq, marked by continuous instability”.

Archbishop Schick, who visited the two countries recently, said he was impressed by the courage and resilience of the local Church and its faithful.  “Part of the essence of Christianity, he said, is not to withdraw into oneself, but to help all people in material and spiritual need and in spreading hope and trust.

“Although the atrocities committed by Islamists have traumatized and upset many Christians in a lasting way,” he noted, “the Church in Syria and Iraq is convinced of the importance of its centuries-old existence in the Middle East”.  “The Church is aware of her call to assist all people, regardless of their religious affiliation, in the service of Christian charity,” the German bishops’ official said.

Father Dirk Bingener, the president of the catholic missionary society, Missio, basedin Aachen, explained the crucial importance of educational work in Syria and Iraq in strengthening interreligious dialogue, cohesion and peace.  “It is our conviction,” he said, “that members of all religious communities can succeed together in defending human dignity and the fundamental rights of freedom.”

“Our partners in Syria and Iraq,” Father Bingener said, “exemplify that peaceful religious coexistence requires a determined commitment, even in the face of bitter setbacks.”  “Peaceful religious coexistence,” the priest said, “goes hand in hand with the cultivation of intercultural competence, the development of an individual religious identity and the will and capacity for interreligious dialogue.”  The Church in Syria and Iraq, he added, has been serving these objectives through education.