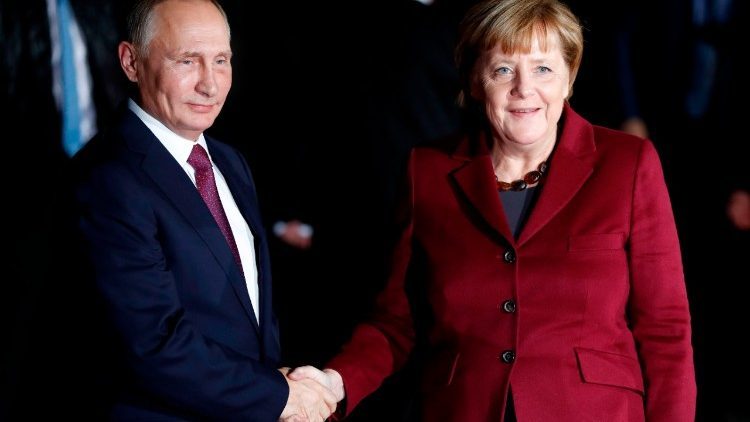 Germany’s Chancellor Angela Merken and Russian President Vladimir Putin meet Saturday at the German government’s guest house outside Berlin at an awkward moment for both nations.  A German government spokesman has confirmed that topics include Russia’s role in the civil war in Syria, an ongoing conflict in Ukraine and energy questions.

The two leaders meet at a time that President Putin is facing possible more U.S. sanctions on Russia imposed by his American counterpart Donald Trump. Putin seeks to soften or head off any European support amid economic turmoil at home.

At the same time, both Germany and Russia want to move ahead with the Nord Stream 2 natural gas pipeline. But that project has been criticized by U.S. President Trump as a form of Russian control over Germany.

He wants countries such as Germany to spend more on defense as they are part of the NATO military alliance. “I think it’s a horrific thing that’s being done, where you’re feeding billions and billions of dollars — from Germany primarily, and other countries, but primarily from Germany — into the coffers of Russia when we’re trying to do something so that we have peace in the world,” he told reporters last month.

But the project would add another natural gas pipeline under the Baltic Sea, allowing more Russian gas to bypass Ukraine and Poland.

In an attempt to ease frictions with allies over the plan, Merkel is expected to push for a Russian commitment to keep at least some gas transiting Ukraine. That country earns transit fees from it.

Putin has already said he’s open for shipments to continue if Ukraine settles a natural gas dispute with Russia.

Germany also has a keen interest in seeing some of the Syrian refugees in Germany return home. That’s why it wants to see at least some settlement of the civil war in Syria. Russia’s support is crucial as it backs Syria’s President Bashar Assad with military force.

Putin has pushed Germany and other Western nations to help rebuild Syria’s economy ravaged by more than seven years of civil war.

He argues that it would help encourage refugees from Syria to return home, easing the pressure on Europe.

It now remains to be seen whether Germany will be able to bridge its differences with the US and other allies on how to deal with Russia.

PRESS RELEASE ON THE UNPRECEDENTED FLOODS IN KERALA