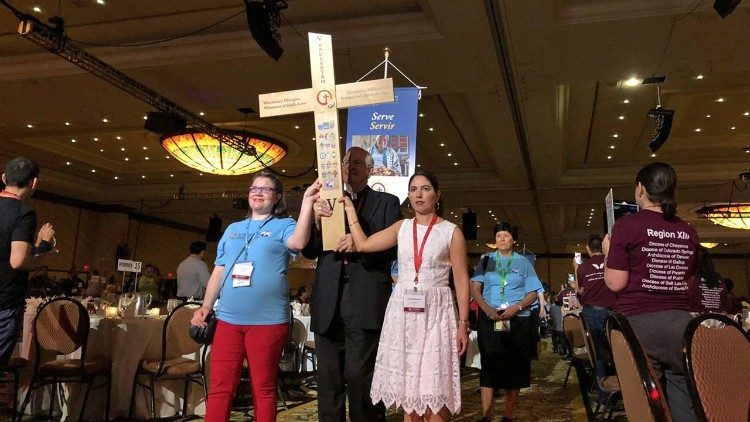 Dr Hoffsman Ospino, Professor of Theology at Boston College’s School of Theology and Ministry, is one of the organizers of the V National Encuentro meeting. The Conference opened on Thursday evening in Grapevine, Texas and will conclude on Sunday. Dr Ospino spoke with Vatican News about the Encuentro planning process and what he hopes the Encuentro will accomplish.

Dr Ospino told Vatican News that the V National Encuentro is the result of a process that began in 2013. At that time, several Bishops’ committees of the US Bishops’ Conference (USCCB) organized a core team. This team “envisioned the process which actually has been a 4-year process of discernment, and evangelization”, Dr Opsiono said. He participated as one of the members of the core team, bringing to it a theological perspective.

That process eventually led to meetings held in “parishes, in the fields, in schools, universities, and all those places where Latinos/Latinas in the US live and share their faith and talk about life”, Dr Ospino shared. In the end, about 330 thousand Hispanics participated in encuentros held in parishes, dioceses and various regions of the US. Speaking one day before the opening of the National Encuentro, Dr Opsino said, “Now, it’s so exciting to see that all this energy and the voice of the people, of the Latinos/Latinas, and many others who work with the Latino community, are coming to Dallas to share what they have learned from the grass roots. Then, to engage in conversation to look forward with hope into the future of not only Hispanic ministry, but also Catholicism in the US”

Hope for the future

Dr Ospino expressed his hope that the V National Encuentro might “spark new energy and a fresher commitment” in Hispanic Catholics in the US. He also said this hope is shared by many other Catholic leaders. Latin Americans make up 40% of the US Catholic Church, and 60% of US Catholics under the age of 18. “This is a Church that has become significantly Hispanic. It’s been transformed and shaped by the Latino presence”, Dr Ospino told us. The prolonged preparatory process has generated both a conversation and a new conscious and awareness about the Latino community has been generated, Dr Ospino said. He concluded his interview with us saying, “So, my hope is that we’re going to start infesting and moving forward with projects, initiatives that invite Hispanic Catholics to assume a level of protagonism in the evangelization process in this country.”

Pope at St Mary Major ahead of visit to Baltic Nations

Pope at Mass: ‘take the road of mercy to God’s heart’