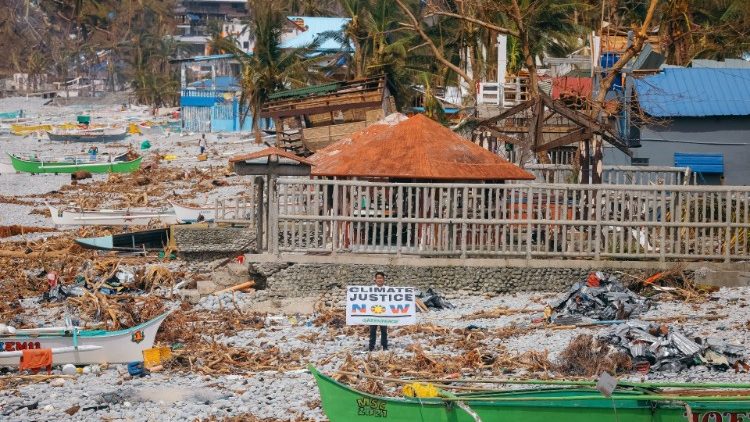 Greenpeace has joined hands with young people in the Philippines to deliver “love letters” to presidential candidates in next month’s elections, calling on them to ensure “climate justice and climate action”.

The “love letter” initiative, in view of Earth Day, Friday, April 22, is part of the “Love, 52” election campaign led by 18 Filipino youth organizations from various sectors together with Greenpeace, the global organization that campaigns on pressing environmental issues.

The “Love, 52” campaign takes its name from young people who make up 52% of the Philippine electorate.  “The youth will be playing an important role in electing the right leaders and consequently, shaping a future that’s green, just, livable, and lovable,” Greenpeace said.

The “love letter’ campaign came in the wake of Typhoon Megi (locally known as Agaton), which made landfall on April 10.  The storm killed killing over 172 people, displaced over 346,000 and caused serious damage to extensive farmlands and infrastructure.   Such storms that frequently hit the Philippines are a reminder of the devastating effects of climate change on the lives of the people.

“Signing the love letter will strengthen our call to our future leaders for a better normal and a brighter future,” Greenpeace said.

The young people called on presidential candidates to protect communities and ensure that the country’s next generation will not experience the worst impacts of the climate crisis.

They also called on candidates to stand for “inclusive, transparent and inspired models of governance that are fully accountable to people, and which protect and strengthen democratic processes and institutions.”

3045 supporters have signed the letter, with Greenpeace hoping to deliver at least 5000 to the 10 candidates in Metro Manila who are running for the country’s top position in the May 9 election.

The voice of youth

“This election poses a gross lack of discourse on the climate crisis at a time when scientists around the world are standing up for climate justice,” said Cris Jamil Hertez, the “Love, 52” youth partner from the Better Normal Youth Movement.  “We can’t keep playing catch-up with our climate; our future leaders must listen to the youth,” said Hertez.

Carmela Adelantar of the National Society of Parliamentarians said future generations “have the most to lose if our next leaders still choose to sit idly by.”

“They need to hold the world’s biggest polluters accountable for the crisis we’re facing, and come up with coherent plans that will at least help us stay alive beyond the next decade,” she said. “We no longer have time to wait. The next administration must place climate action as top priority agenda,” said Greenpeace campaigner Joanna Sustento. “The climate crisis is not just about the environment, it’s about food, water, lives, health, and the economy,” she said, calling for strengthening also the democratic processes and institutions.

Greenpeace is calling on future leaders to hold fossil fuel companies accountable for the climate crisis and to call on other countries to do the same.

“It must also lead the call for a global phase-out of fossil fuels toward a just transition to renewable energy,” read a Greenpeace statement.

It is calling on rich countries for more ambitious emissions reductions allotting more money for climate finance, and compensation for loss and damage.  It is also urging that climate action become the central state policy of government institutes to ensure climate justice.

According to the environmental group, the next 6 years of the new Philippine administration are a “crucial period” for the country that “will dictate the state of the planet in the coming decades, depending on how we quickly address the climate crisis we’re experiencing now”.