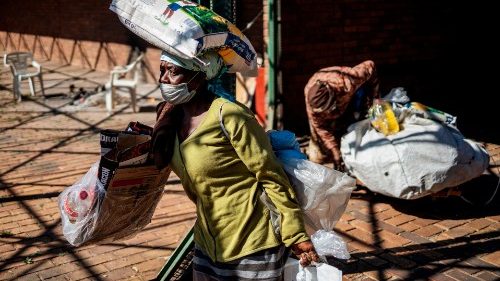 As South Africa becomes the fifth worst-affected country globally in terms of coronavirus infections, Cardinal Wilfrid Fox Napier, decries the legacy of colonialism as one of the prime reasons for the continent’s inability to respond adequately to the emergency.

The number of registered coronavirus infections in Africa has crossed the 700,000 mark. Half of the cases are recorded in South Africa where there are over 350,000 confirmed infections.

According to the WHO, 10 African nations account for 88% of all reported Covid-19 cases on the Continent. They are South Africa, Nigeria, Ghana, Algeria, Cameroon, Côte d’Ivoire, Kenya, Senegal, Ethiopia & DRC.

The crisis is compounded by the fact that Sub-Saharan Africa hosts more than 26% of the world’s refugees and around 19 million internally displaced people. Theese populations are particularly vulnerable and at risk, not only of contracting the disease, but also of receiving adequate health-care.

Speaking during a press conference to present Caritas Internationalis’ annual report, Cardinal Wilfrid Fox Napier, Archbishop of Durban and President of Caritas South Africa, said the pandemic highlights “the parlous state of relations between the countries of Africa and the international community.”

“That is particularly true of former colonizers of the Continent,” he said.

The Cardinal went on to say that because of that relationship, there is a huge gap in the sharing of “knowledge and information, as well as expertise and the means to respond and to fight off Covid-19.”

He said that in most cases, former colonial relationships have mutated from occupation and control to ‘quasi’ freedom “which is characterized by near-total dependence on the former occupying power for virtually everything,” noting that most African countries are, de-facto, still occupied by Europe and by the west.

The burden of International Debt

Cardinal Napier pointed to the burden of International Debt as the main factor holding African nations back “from taking their place in the world community as worthy and equal partners.”

Specifically, he added: “How covid is spread, how it affects the body, what simple safety measures can be taken to avoid being infected and to pass on the infection.”

Throughout Africa, the Cardinal said, anti-covid action has been thwarted by the inability to access the ‘know-how’: material and other resources known to be effective in dealing with the pandemic.

Role of the Church

In all of this, Napier continued, the Church is called to be an important actor in bringing about a change of mentality, and consequently of action.

“I believe that the church can do an enormous amount to close the gap in Africa’s ability to fight off the virus,” he said.

Cardinal Napier explained a second key area in which the Church can and must intervene in changing the relationship between Africa and the world community: “from colonisation to political independence, from political independence to economic self-determination, from the theory of self-determination for the real and effective action against Covid-19.”

“A third. and vital area of remedial action, which the Church can take up and run with, is that of working towards making Africa self-reliant,” he said.

Cardinal Napier called for a sharing of resources and international solidarity “so aptly summed-up by St. Pope John Paul II as the ‘Globalisation of Solidarity’.

Cardinal Napier, pointed to endemic corruption at a political level as one of the main reasons for the country’s inability to cope.

He explained that as soon as it became clear that the new coronavirus was going to be a major problem in South Africa, Christian leaders across the board got together to formulate the Church’s response.

Representatives of that ecumenical group, he said, then met with the Premiere of the province. The message they came away with was that the ground was being laid for optimum response and that the strict lockdown had been imposed to enable health and medical personnel to prepare themselves for what was coming.

“We kept being informed that this was happening and that when it came to this point we would be adequately covered,” he said.

However, the Cardinal pointed out, time has passed, the lockdown has gone through different phases, but now that the infection rate is spiking, the death rate is also doubling.

“We are finding now, that preparation was not done,” he said. Sadly, “a lot of that lack of preparation was due to the fact that funds were being embezzled or stolen in one form or another” as demonstrated by the fact that the situation is most critical in those parts of the country where there is an endemic problem of corruption.

As South Africa becomes the fifth worst-affected country globally in terms of coronavirus cases with over 364,000 infections in the country, with a rapidly spiking infection curve.

This weekend the health minister appealed to South Africans to adhere to health regulations that will help curb the spread of Covid-19 at a time in which fatigue seems to have set in and citizens appear to be letting down their guard.

His appeal comes as reports emerge of a collapsing health system and a serious deficiency in tackling the crisis notwithstanding an early response to the global crisis.

Cathedral reopens in Syria: ‘a sign of hope and rebirth’