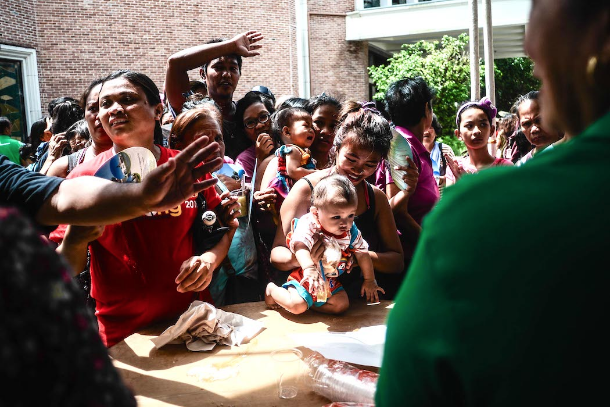 Do not for a moment think that Catholic Church leaders in the Philippines confine themselves only to ministering to the spiritual needs of the faithful in this predominantly Catholic country.In fact, church people stand on the front line of protecting human rights amid a bloody war on illegal drugs that has already left thousands of drug suspects killed in what police claim are legitimate operations where the victims chose to fight it out rather than surrender peacefully.In Cebu City in the central Philippines, church people again demonstrated their commitment to human rights, due process, and the rule of law when they decided to give refuge to one of two survivors of an apparent summary execution.Sharmaine Puran, a suspected drug courier, was allowed by church leaders to stay at the archbishop’s residence after she survived an Oct. 11 gangland-style shooting of seven people in a suburb of the city.Puran and Antonio Belande, a tricycle driver, claimed that policemen were behind the killings, which the Central Visayas police office vehemently denied.

Monsignor Joseph Tan, spokesman of Cebu Archdiocese, said the church was giving the woman “pastoral custody.”Archbishop Jose Palma of Cebu, who has been critical of the killings during President Rodrigo Duterte’s time in office, has declined to issue a statement pending the results of an investigation.Meantime, as proof that church people in the Philippines take to heart their commitment to help protect people’s welfare, priests and church volunteers from Lipa Archdiocese in Batangas province have agreed to undergo training as emergency response volunteers.In September, Archbishop Gilbert Garcera of Lipa and Father Jayson Siapco of the Lipa Archdiocesan Social Action Commission signed an agreement to support Project Basic, which is part of a wider disaster response program.Through the initiative, priests and volunteers from the archdiocese will undergo basic emergency and disaster response training with support from the Batangas provincial government, the Bureau of Fire Protection, and a privately owned power generation company.The move by Lipa Archdiocese is timely and appropriate as legislators are now deliberating whether to establish a Department of Disaster Resilience that would centralize disaster risk management efforts.The Philippines is battered annually by an average of 20 typhoons from the Pacific Ocean that bring floods and landslides that lead to loss of lives and destruction of property.But that’s not all. The Philippines also lies within the so-called “Pacific Ring of Fire” or the string of active volcanoes that sometimes erupt violently and send people scampering to safer ground.Then there’s also earthquakes that pose a grave danger to communities, as the country is dotted with fault lines that occasionally move, causing temblors that kill people and destroy buildings. In a 7.2 magnitude earthquake in 2013 that hit Bohol province, also in the central Philippines, more than 150 people were killed and several old churches were destroyed.Given this vulnerability of the Philippines to natural disasters, Catholic Church leaders often extend a helping hand to victims in close coordination with national government agencies, local authorities, and non-government organizations as well as international humanitarian organizations.