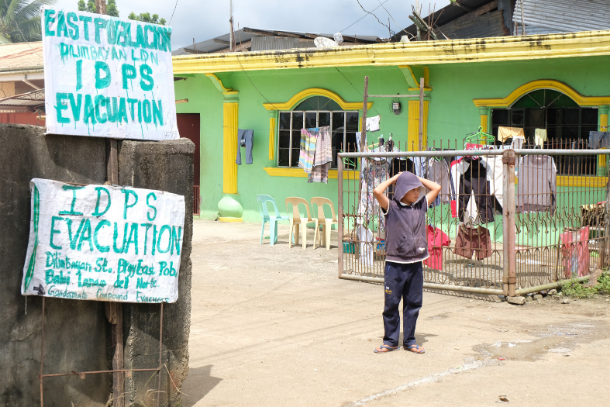 More than 100,00 have yet to return to school since end of hostilities in southern Philippine city over a year ago, UN says A boy stands outside an evacuation center in the town of Balo-i, Lanao del Norte province. At least 100,000 children have not gone back to school a year after the liberation of Marawi from extremist groups in 2017. (Photo by Bong Sarmiento)

Bong Sarmiento, Cotabato
Philippines
October 12, 2018
A church organization in the southern Philippines is appealing for help to ensure thousands of schoolchildren affected by last year’s conflict in the city of Marawi get an education.Almost half a million people were affected by the five-months of fighting that ensued after extremist gunmen attacked the city in May last year.More than a year after the end of the conflict over 100,000 children have yet to return to school, according to the United Nations’ Office for the Coordination of Humanitarian Affairs.Duyog Marawi, a church initiative, started early this year an alternative learning school called “School of Hope” for children forced to drop out of school because of the conflict.”This is where we plant the seeds of dialogue, peace, and resilience for a new generation of Meranaw,” said Brother Reynaldo Barrido, executive director of the organization, referring to the predominantly Muslim population of Marawi.”We are hoping that Christians around the country will support the school,” said Barrido.The “School of Hope” is part of Duyog Marawi’s Protection and Children Education in Marawi, which aims to integrate peace education, psychosocial support, and skills training for students.The organization has also established “child-friendly spaces” at seven evacuation centers where children are provided with play therapy, reading and writing classes, and food.Duyog Marawi is the response of the Prelature of St. Mary in partnership with Redemptorist missionaries to help “heal the wounds” inflicted by the war on civilians.Almost a year after the end of the conflict only 21,000 children have enrolled in public elementary and secondary schools in the city and in neighboring conflict-affected areas.In Marawi, 20 out of the 69 public schools were destroyed in the conflict
Share FacebookTwitterGoogle+WhatsAppPinterestEmail

Church needs to do practical things for young people.

Malaysia to rein in policing of morals