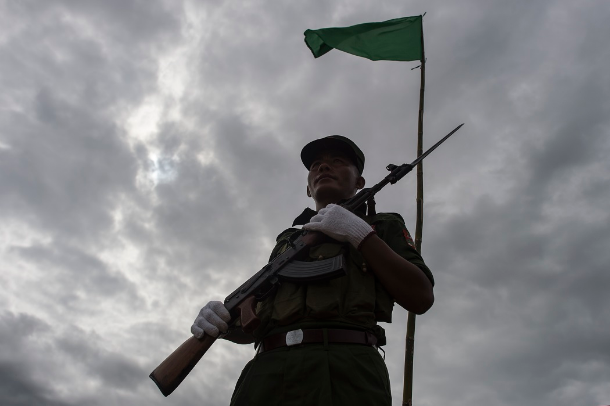 Pressured by the Chinese government, the United Wa State Army (UWSA) has launched a clampdown on Christianity, detaining several pastors and teachers and closing all schools in Shan State near Myanmar’s border with China.The UWSA leadership has instructed its troops and administrators to find out what missionaries are doing in the remote hills of northeast Myanmar since the crackdown began in early September.The move follows the arrest of Chinese pastor John Cao in March 2017 for illegally crossing the border. In June 2018, he was sentenced to seven years in jail.Cao has helped build 16 schools serving 2,000 students among the impoverished Wa people in Myanmar, according to China Aid, an American-based watchdog that focuses on religious freedom in China.He is a prominent figure in China’s “house church” movement, a network of small, unregistered congregations that operate independently. He began his mission in the Wa region in 2013.

Some observers believe that China is behind the UWSA move. Beijing sees missionaries as tools of Western influence among Myanmar’s ethnic minorities, several of whom, such as the Wa, have Christians among them.Chinese officials also view Western non-government organizations (NGOs), especially those that are faith-based, as rivals seeking to influence Myanmar’s peace process or even as foreign agents. Challenging the party’s moral authorityBertil Lintner, a Swedish journalist and a long-time Myanmar expert, says that China fears faith-based spiritual movements more than political opposition because they challenge the moral authority of the ruling Communist Party. That is why Beijing cracked down heavily on the Falun Gong spiritual practice, followed now by Christians and Muslims.”The emergence of new Christian communities in the Wa Hills is worrisome (for the Chinese government) because they may have links with underground churches in China and the West,” Lintner told ucanews.com.Historically, he said, Baptists have always been more non-conformist, even rebellious, than Catholics. “The Chinese also know that the Baptists and other free churches are well connected in the United States, and that is a main concern.”China has successfully outmaneuvered most Western NGOs and other Western-sponsored outfits in the struggle for influence over Myanmar’s stuttering peace process. But Myanmar watchers believe that China now views religious groups as potentially more potent Western contenders for influence, according to an Asia Times report on Sept. 17.The report added that it is clear that China does not want U.S. missionaries emerging in the Wa Hills.The recent expulsions of Catholic clergy and teachers come as part of a campaign in which the UWSA — which originated as the Communist Party of Burma — has destroyed unauthorized churches in the Wa region since Sept. 13. As part of that, four Catholic teachers were detained for two days while officials checked church-run boarding schools and a nuns’ convent.A Catholic priest who is closely monitoring the situation said it is the first crackdown by the UWSA since the Catholic mission started in the Wa Hills nearly 30 years ago.He added that officials who check schools come from UWSA headquarters as local people said they had never seen them before.Wa officials told nuns and teachers to leave the area. They will call them back after finishing the crackdown, according to the priest. “We have no idea how long we will have to wait to go back to the mission,” the priest told ucanews.com.On Sept. 26, the Lahu Baptist Convention in eastern Shan State said 92 pastors had been detained, three churches destroyed and 52 churches shut down. It also said that the UWSA had forcibly recruited 41 male and female students who were studying in Bible schools.Rev. Hkalam Samson, the chairman of Kachin Baptist Convention, said there are not only Kachin Baptists but other Baptists such as Lahu and Wa in the region.”I heard that several Baptist leaders have been detained and all churches and schools have been closed amid investigation by UWSA officials,” Rev. Samson told ucanews.com.

Cracking down on ‘religious extremists’ Undated videos appearing to show UWSA officers destroying crosses, demolishing a new church and sealing off a church went viral on Facebook and Twitter on Sept. 19.Local media reports quoted Nyi Rang, a UWSA communications official in Lashio, Shan State, as saying that they are cracking down on so-called religious extremists in Wa territory as missionaries have not obtained official permission and clergy members are operating outside the law.The UWSA has announced that all churches built after 1992 were illegally constructed and will be destroyed. Only churches built between 1989 and 1992 have been deemed legal.It has banned the construction of new churches and requires priests and workers in churches to be local, not foreign. It has also banned religious teaching in schools in the Wa region, while UWSA functionaries have been forbidden to be members of any religious organizations.The UWSA leadership has also pledged to punish any local administration cadres supporting missionary activities.  Myanmar’s government, which has no control over the Wa self-administered region, has been silent over the pro-China crackdown. State-run newspapers have not followed private media in covering the issue.China is an ally of Myanmar and plays an important role in Myanmar’s peace process. It can also shield Myanmar from action over the Rohingya crisis as it holds veto power at the United Nations.The Wa region is home to ethnic groups including the Wa, Kachin, Ta’ang, Lahu, Lisu, Kokang and Shan who observe Christianity, Buddhism, animism, spirit worship and Islam. Christians comprise around 30 percent of the estimated 450,000 Wa.The 30,000-strong UWSA — Myanmar’s largest ethnic army — is also understood to be one of the major drug-trafficking groups in the Southeast Asian region

Let’s go a year in America without the elites