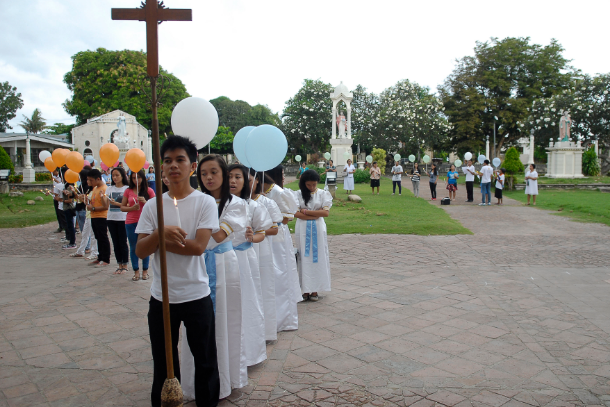 Children of victims of the war against drugs in the Philippines are joining a global campaign to pray the rosary for peace on Oct. 18. The international Catholic pastoral charity Aid to the Church in Need said at least 1,200 parishes and 700 Catholic schools from 41 Philippine dioceses are also participating in the  “One Million Children Praying the Rosary” campaign.The highlight of the Philippine observance will be a prayer led by orphans of drug war victims in Kalookan Diocese, in Manila. “The Lord listens to the children and their prayers are very powerful,” said Bishop Pablo Virgilio David of Kalookan.The diocese has been active in supporting widows and orphans of victims of the drug war by raising money for the children.Assistance, through counseling and other material support, is also provided to poor families.Jonathan Luciano, director of the Aid to the Church in Need in the Philippines, said the campaign is a “concrete expression” of support by Filipino children to other children in countries where Christians are persecuted. He said that aside from prayers, Filipino children will also be offering a portion of their allowance to children in Iraq, Syria, and Africa.”Their donations will be used for projects that would help children in persecuted Christian communities,” Luciano said. “We would like to have these children lead the rosary as a gesture of peace and reconciliation that the world badly needs today,” he added.The children’s rosary campaign was initiated in 2005 in Venezuela.The initiators have placed their faith in a quotation from St. Padre Pio, “When one million children pray the rosary, the world will change.”In 2016, children in 69 countries took part in the prayer campaign.