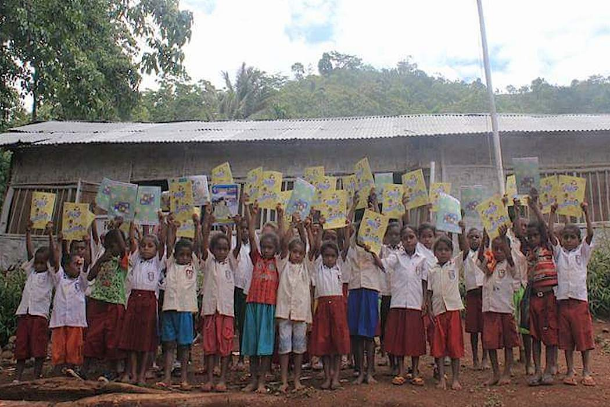 John Donbosco Lobo was shocked by what he found when he paid a visit in 2013 to his former elementary school in Jerebuu, on Indonesia’s Flores Island.He discovered that the books in the school’s library were the same ones that were there when he attended the school more than 30 years previously, only most of them were torn and in a very sorry state.”The books were dusty, dilapidated, and worse, I could only find the covers for many, as the pages had disappeared,” Lobo, 46, told ucanews.com.”I keep asking myself, how can young people from remote areas like my boyhood village get a decent education if they don’t have access to new books?” said Lobo who later moved from East Nusa Tenggara province and now works as a Catholic religion teacher in a state school in Mojokerto in East Java.East Nusa Tenggara and several other provinces in the eastern part of Indonesia have always been at the bottom in terms of education quality, mainly due to illiteracy

An early grade reading assessment by USAID in 2014 revealed that children in Java and Bali could read 59.2 words per minute, whereas those in Nusa Tenggara, Papua and Maluku provinces could only read 29.7 words per minute. It also revealed that only 46 percent of children from those provinces could understand what they read compared to 78 percent from Java and Bali.According Indonesia’s Education Ministry, Papua had the country’s highest rate of illiteracy as of last year with 28.75 percent of the population still unable to recognize letters or read. West Nusa Tenggara province was second highest on 7.91 percent. Lobo believes these high rates are not because students are lazy to learn, but because of a scarcity of books.”Simply put, students at schools with better facilities, such as good libraries, are more advanced than others,” he said.In October 2013, soon after the visit to his old school, Lobo and his wife — a nurse — began contacting people, asking them to donate books.A former patient of his wife was the first to respond.”In a matter of days, a truck loaded with books arrived,” he said.Lobo later sent them to his alma mater, St. Thomas Aquinas Senior High School in Mataloko, Flores, which then delivered the books to elementary schools.Immediately after he shared photos of the books on his Facebook account, messages from various schools came in, asking for his help.”We asked parishioners to bring books when they attended Mass, which they did,” he said.”Muslim neighbors also lent their support and donated books,” he said

Lobo’s donation drive, which he called Katakan dengan Buku (Say it with books) was initially only for Catholics in East Nusa Tenggara province. It has since mushroomed to help people in other regions, including Muslim groups.The scale of this endeavor has also forced Lobo enlist the help of volunteers, such as friends or university students.Last year one such group in Maros in South Sulawesi, asked him to send them Qurans, which he did with the help of his Muslim friends.Donors initially paid for shipping. However this became much easier in May last year when Indonesian President Joko Widodo began Free Cargo Literacy — a program to send books free of charge across the country every 17th day of every month.Lobo has now been listed as a special member who can send books in large quantities.”Every month I can ship over a thousand books,” he said, with the help of university students in East Java.Franciscan Father Vincensius Darmin Mbula, chairman of the National Council of Catholic Education, said Lobo’s literacy initiative is helping to overcome book shortages experienced by many schools in remote areas.He said schools do not have problems with course books since the government provides them.”But very few schools have supplementary reading, such as story books, magazines or comics,” he said, which are equally important to enhance a child’s knowledge.  “Any individual initiative, such as John Lobo’s, is very positive,” he said.Lobo said what he has been doing is a manifestation of his Catholic faith, which is to love other people.”I just feel that I have an obligation to dedicate myself for others in need through a simple way,” the father of two said.He said he always feels motivated when he sees photos of children receiving books that came from him.”Their cheerful faces are the reason I continue doing this,” he said.

Pope: ‘May believers be builders of bridges and artisans of peace’