Pope: ‘May believers be builders of bridges and artisans of peace’ 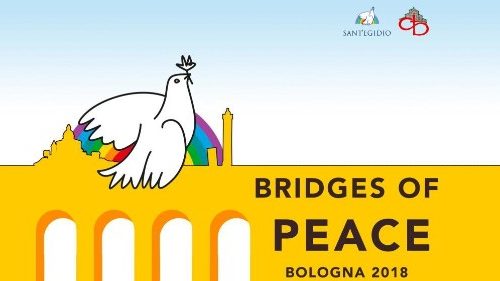 In his message to the Archbishop of Bologna, Matteo Maria Zuppi, and to representatives of Christian Churches and Communities and of other world religions, gathered for the Community of St. Egidio’s annual “Bridges of Peace” meeting, Pope Francis notes that the event comes in the footsteps of the historic meeting that took place in October 32 years ago in the town of Assisi.

The need to pray tirelessly for peace

Since then, he notes, world scenarios have gone through dramatic change, while this annual meeting has remained, testifying to the continuing need to tirelessly pray together for the gift of peace.

Remarking on the title chosen this year, “Bridges of Peace”, he said it is an invitation to create connections that lead to real meetings, to tie bonds that unite, and to follow paths that help overcome conflict in a globalized world, where unfortunately it seems easier and easier to increase distances and close oneself in one’s own interests, “we are called to work together to unite people and peoples”.

It is urgent, Francis says, to heal the wounds of history and weave plots of peaceful coexistence for the future.

Never be resigned to war and terrorism

He urges those present never to be resigned to the demon of war, to the madness of terrorism, to the deceptive force of weapons that devour life.

“We cannot let indifference take possession of men, making them accomplices of evil, of that terrible evil that is war” in which the highest price is paid above all by the poorest and weakest, he says.

He calls on all believers not to shirk their responsibility as people of faith and to allow themselves to be content with their own peace.

The responsibility of believers

“If religions do not pursue paths of peace, they deny themselves” he says.

Our differences, the Pope continues, must not, therefore, put us against one another as the heart of those who truly believe exhorts us to be open, always and everywhere, to ways of communion.

The Pope recalls his message two years ago in Assisi, on the occasion of the 30th anniversary of the first meeting, in which he highlighted “our responsibility as believers to build a world of peace”.

He says that especially where there are conflicts men and women of religion must come together because our future is to live together.

“That is why we are called to free ourselves from the heavy burdens of distrust, fundamentalism and hatred” he says.

May believers be artisans of peace, he continues, noting that religious leaders are bound to be solid bridges of dialogue and creative mediators of peace.

He also appeals to the leaders of nations, so that they do not tire of seeking and promoting ways of peace, looking beyond the interests of a party and responding to the cry for peace of the poor so that the expectations of the younger generations so not remain unheeded.

Francis also issues an invitation to young people to “grow up in the school of peace and become builders and educators of peace” and says that in these days the Catholic Church is asking itself in a particular way about the younger generations.

He says that for many the world they live in appears hostile and violent, and that many have not known peace and many do not know what a dignified life is.

“As believers, we can only feel the urgency to listen to the strong cry for peace that rises from their hearts and to build together a future that belongs to them. Therefore it is necessary to build bridges between the generations” he says.

Pope Francis concludes his message pointing out that “Today’s life tells us that it is very easy to fix our attention on what divides us, on what separates us”: many would like us to believe, he adds, that closing ourselves off is the best way to protect ourselves from what hurts us.

But young people must learn that it is easier to build bridges than to build walls! This is the only path to walk, he reiterates, one supporting the other and with the help of the Lord.