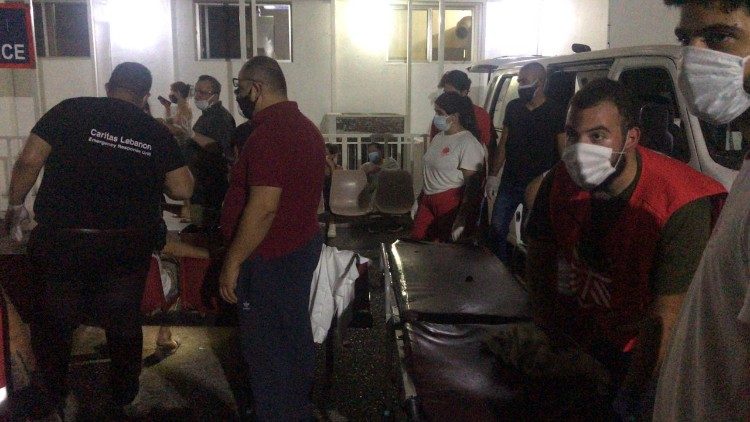 Caritas Internationalis launches an emergency plan to assist victims of Tuesday’s massive explosion at the port in Lebanon’s capital, Beirut.

“The situation is critical and this is the first time that we have experienced a situation of such great magnitude. It is apocalyptic, but we don’t stop and we will carry on in order to help all those in difficulty,” said Rita Rhayem, director of Caritas Lebanon.

“There are a lot of dead and a lot of injured, and the health situation is likely to worsen quickly, as the toxic gases can cause additional health problems,” she continued. “Caritas Lebanon is preparing for this, but its health centres have no means to face this kind of situation, and rescue operations are made even more difficult by the lack of electricity”.

Peter Mafhouz, the head of the Youth Department for Caritas Lebanon, spoke with Sr Bernadette Reis on Wednesday morning about the devastation.

“Basically it’s a huge disaster,” he said. “We have till now more than one hundred dead, four thousand injured, hundreds of families who have lost their homes because of the damage. It’s a huge explosion that shook all Beirut and the neighbouring areas. The chaos is huge in Beirut right now.”

Mafhouz described the work Caritas Lebanon is doing as part of its first response efforts. “We’re trying to help out in the field, distributing food, removing the debris, looking for a lot of missing people. It’s a huge tragedy for Beirut.”

Caritas Lebanon has been providing basic food assistance and medicine, as well as helping hospitals, which are now at full capacity. In addition, they are helping with mental health. “A lot of people need someone just to talk with them,” said Mafhouz.

Given the scope of the tragedy, Mafhouz said any kind of help that can be given is urgently needed. Information on how to donate to relief efforts can be found on the Caritas Lebanon website.

The international community must intervene

Caritas Internationalis Secretary General Aloysius John noted that Lebanese are already suffering from a severe economic crisis, ongoing violence, and the Covid-19 pandemic, as well as the consequences of economic sanctions imposed on Syria.

He said “the international community must intervene urgently and unconditionally to help the population. There is a need to support the efforts of faith-based civil society organizations, in particular Caritas Lebanon, which is present throughout the country to meet basic and urgent needs, especially in this time of tribulation and trials for the Lebanese people.”

He added, “It is vital that the international community acts decisively to alleviate the suffering of poor Lebanese, immediately removing economic sanctions.”