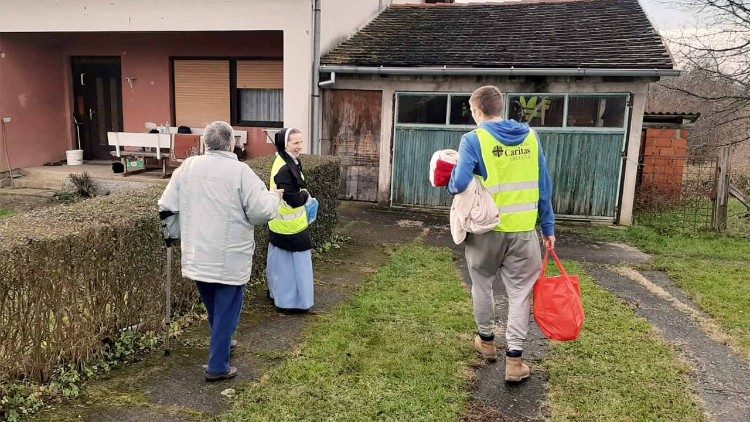 A series of powerful aftershocks have rocked central Croatia following a magnitude 6.4 earthquake on 29 December. The tremors could be felt in several neighbouring countries.

Caritas Internationalis, the worldwide federation of national Catholic charities, has launched an appeal for €880,000 to help Caritas Croatia ensure safe and dignified living conditions for people made homeless by a powerful earthquake recently.

A series of powerful aftershocks have rocked central Croatia following a magnitude 6.4 earthquake on 29 December, which struck around 30 miles to the south of Zagreb, between the towns of Petrinja, Sisak and Glina. Tremors were felt as far away as Austria’s capital Vienna. The second earthquake in two days and the strongest in the area for 140 years killed 7 people, injured more than 20 and caused widespread damage.  The tremors could be felt in several neighbouring countries, officials and residents said.

“The ground has been shaking every day since the original earthquake and people are living in constant fear and stress. A vast area of around 2000 square kilometres has been affected,” said Suzana Borko, deputy director of Caritas Croatia. She said 200 Caritas volunteers have been out delivering food and hygiene items to those affected since the earthquake struck.

Caritas is now focusing on long-term recovery and is helping people rebuild their homes and communities. Its 8-month project will initially help up to 200 households by providing prefabricated container accommodation and financial and technical help so people can repair their homes.

According to Borko, “many of those affected in rural areas want to stay near their crops and livestock, so they are sleeping in barns, in their cars and in the ruins of their homes.” She said, “Caritas Croatia will help them as they rebuild their homes and communities so they can live in safe and dignified conditions.”

The response of Caritas will focus on helping people in rural areas who risk being overlooked because of their geographical isolation. Borko estimates up to 90 per cent of houses in villages between Petrinja and Glina have been damaged. One of the challenges is to reassess if the homes are inhabitable after each successive quake.

Despite the challenges, she is optimistic about the solidarity response. “At this challenging time,” she said, “we’ve seen a miraculous humanitarian response within our country, with many people sending food and clothes and construction items to the affected areas.” “Decent shelters and the rebuilding of homes are a primary focus for us and we will stick with these communities until we have achieved this,” Borko added.

Soon after the quake, Pope Francis expressed his solidarity with the victims. Speaking at the weekly General Audience the following day, he expressed his closeness with the injured and those affected by the quake, assuring his prayers for the dead and their families.

The Holy Father hoped that the international community would help Croatian authorities to bring the needed help those suffering.

The Apostolic Nuncio to Croatia, Archbishop Giorgio Lingua visited the Diocese of Sisak, the worst affect by the quake. Accompanied by Bishop Vlado Košic, he visited the distribution centre of the diocesan Caritas and met with its volunteers. He described their commitment as “a sign of hope that helps us understand that at the root of man ‘is always the good’”.  The bishop, whose cathedral has been badly damaged, thanked the Holy See for its closeness in the difficult times for the diocese, as well as for the spiritual and material help that comes from all over the world, in response to the appeal of the Pope. “I agree with the nuncio that this event teaches us how fragile we are and how we should work for a better world,” Bishop Košic said.