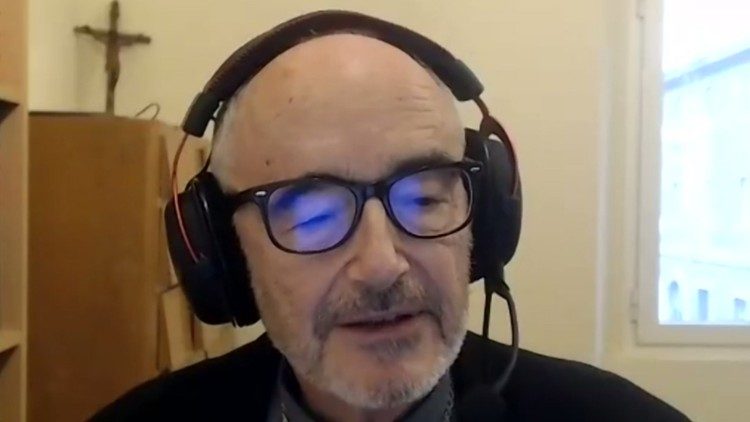 The Undersecretary of the Vatican’s Migrants and Refugees Section addresses participants at an online seminar organized by Sophia University in Tokyo, one year after Pope Francis’ visit.

The role of young people in shaping society will be central in the world that will emerge from the coronavirus pandemic. We can only emerge better from this crisis if we overcome individualism and include those who are most vulnerable and marginalized, such as migrants and refugees.

These are amongst the considerations raised by Cardinal Michael Czerny, undersecretary of the Migrants and Refugees Section of the Dicastery for Promoting Integral Human Development, in his speech during an online conference at the Catholic Jesuit Center of Sophia University in Tokyo.

The effects of the pandemic on migrants

The event took place one year from Pope Francis’ apostolic visit to Japan and included a series of meetings to reflect on the Pope’s words – in particular, on the connection between “protecting all life” and the challenges the world is facing with Covid-19.

Taking inspiration from the Pope’s reflections of the past months and the encyclical letter Fratelli tutti, Cardinal Czerny on Friday invited his audience to think “of how the COVID crisis affects migrants, refugees, displaced peoples, and victims of human trafficking. It has shone an unusual light on these populations. Even ‘normal’ times are not normal for them. They are accustomed to enduring months and typically years of uncertainty, acute anxiety, precarious nutrition and lodging, poor health, legal limbo, and either unemployment or the risk of exploitation and abuse if they do find paid work.”

They cannot go back to their countries of origin because of the closure of borders and they find themselves with even fewer means to survive. Governments seek solutions for their citizens and migrants and refugees risk being doubly – and sometimes deliberately – forgotten. This happens while their contribution to society in this period has been crucial: think of farm labourers or those in charge of distribution and delivery, many of whom live in shantytowns without social distancing, in camps or detention centres.

The “virus” of injustice

Cardinal Czerny noted that the pandemic has struck a society in which there is already widespread injustice – a “big virus” in addition to the “small but terrible virus” of COVID-19, and for the “larger virus” of social injustice, inequality of opportunity, marginalization, and the lack of protection for the weakest.

He recalled the Pope’s definition of injustice as a virus from which one can defend oneself with the antibodies of justice, clarity and solidarity. The pandemic, he said, has highlighted both our vulnerability and our interdependence.

This is not necessarily a bad thing, because these are two factors that unite us and, if we emerge better from these crises, it will be by not falling into the temptation of individualism, be it personal or collective, often expressed in the form of political nationalism and narrow economic interests.

The teachings of Fratelli Tutti

The Cardinal said the answer to the crisis can be found in some ancient teachings of the Christian tradition, as is made clear in Fratelli tutti, where the Pope asks us to establish fraternity and social friendship among all peoples and nations. This, Czerny explained, has clear implications for vulnerable populations such as migrants and refugees.

He also called for the right not to migrate that implies the right of all men and women to obtain self-realization and not be forced to flee tragedies such as hunger, war and climate change to seek new opportunities and to dream of a better future. He decried the many obstacles they face, starting from nationalist and populist regimes that try to exclude migrants, entrenched behind defensive walls and a xenophobic mentality that, he said, is not compatible with Christianity.

The decisive role in creating a culture of fraternity, solidarity and gratuitousness will be played by young people. Respect for history, for the elderly, for creation and a commitment to social dialogue between generations and to solidarity, Cardinal Czerny said, are the founding values for a better society, always going forward with openness, towards migrants and refugees.

“The pandemic,” he concluded, “has put us all in crisis,” but as Pope Francis says: “Let us remember that after a crisis a person is not the same. We come out of it better, or we come out of it worse. This is our option.”

27 November: Day of Prayer for Ethiopia in the “Spirit of Assisi”