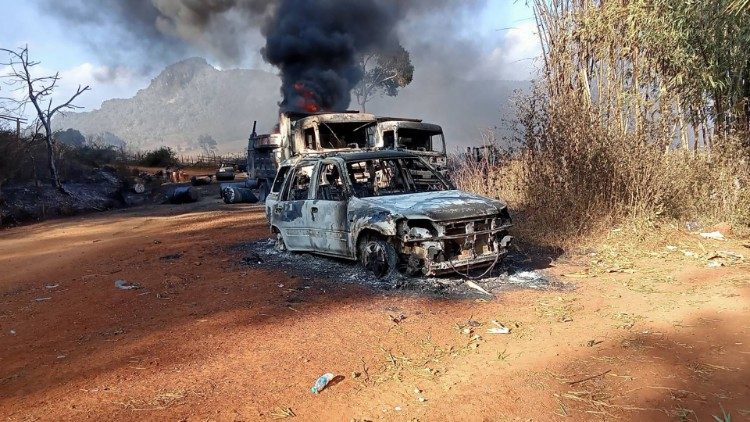 Myanmar’s Cardinal Charles Bo launches an appeal to the country’s military to stop the violence, and calls on the democracy movement and ethnic armed groups to strive for peace. His latest appeal comes in the wake of a brutal attack by military forces on Christmas Day.

“I call on the military to stop bombing, shelling and killing. I call on the democracy movement and the ethnic armed groups to strive earnestly for peace. And I pray from the very depths of my heart for an end to the tragedies we have seen in recent days and weeks and for too many years and decades,” Cardinal Bo said in his boxing day statement, praying for a new dawn for his country and for “the souls of those so brutally murdered.”

The Archbishop of Yangon’s appeal comes in the wake of an attack on Christmas day in which at least 35 people, including women and children, were killed in the eastern state of Kayah.

Myanmar’s National Unity Government (NUG) said that the attack was perpetrated by military junta troops who also detained an unconfirmed number of villagers and destroyed their properties. Two members of the humanitarian organization “Save the Children” are also reportedly missing.

A country in turmoil

Myanmar has been in turmoil since the military overthrew the previous elected government and detained many top officials, including ousted civilian leader Aung San Suu Kyi, who was jailed earlier this month. Since the 1 February coup, the military has used brutal force to assert its power over the people.

The Cardinal described the massacre in Mo So village in Kayah State as “a heartbreaking and horrific atrocity” which he condemns fully and unreservedly, and he noted that “as  many of us celebrated the light and life of the Prince of Peace, so many in Myanmar endured the darkness of death and destruction.”

“The whole of our beloved Myanmar is now a war zone,” he said, and decrying what he described as an “unspeakable and despicable act of inhumane barbarity,” he launched his heartfelt appeal.

“I appeal to all those holding guns to put down their weapons. I urge Myanmar’s military, the Tatmadaw, to stop bombing and shelling innocent people, to stop destroying homes and churches, schools and clinics, and to begin a dialogue with the democracy movement and the ethnic armed groups,” Cardinal Bo urged, pleading also with the armed resistance groups to recognise that guns do not solve the crisis but rather perpetuate it, causing more suffering and downfall.

“While we appeal to the international community for help, for prayers, for solidarity, for humanitarian assistance and for diplomatic efforts to help us end the tragic conflicts and seek peace and justice,” he pointed out that international and multilateral organisations cannot solve Myanmar’s problems.

And he called on the nation to make peace “amongst ourselves” and “together chart a new future of freedom with justice, truth and reconciliation.”

Archbishop Tutu ‘a beacon of truth and freedom’ for the world