Card. Parolin: peace without cross is not Christ’s peace 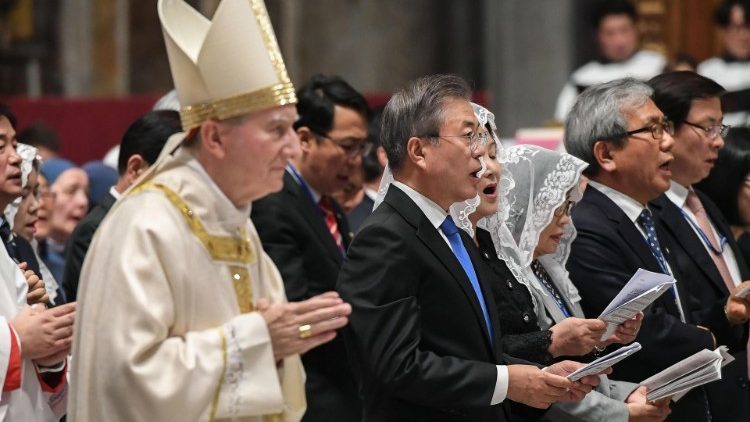 Vatican Secretary of State, Cardinal Pietro Parolin celebrated a Holy Mass Wednesday evening in Rome’s St. Peter’s Basilica praying for peace in the Korean peninsula, saying that peace without crosses and tribulations is not the peace of Jesus.

Present at the Mass were visiting South Korean President Moon Jae-in (a Catholic), his wife, a large group of Korean faithful, a hundred priests and missionaries, some bishops and many representatives of the Holy See’s diplomatic corps.

The Holy See’s Press Office had announced that Cardinal Parolin would celebrate the Mass on Oct. 17, on the eve of a meeting between Moon and Pope Francis.

In his homily, Cardinal Parolin said that they were praying for peace in the world, especially in the Korean Peninsula, so that “after so many years of tension and division, the word peace may finally fully resound.”

The Vatican’s number 2 after the Pope said that “peace is built by daily choices, by a serious commitment to the service of justice and solidarity, by the promotion of the rights and dignity of the human person, and especially by caring for the weakest”.  “But, for the one who believes, peace, first of all, is a gift that comes from above, from God Himself.”

The cardinal pointed out that peace is something lived concretely in daily life, as Pope Francis often repeats, “a peace in the midst of tribulations”.  This is why the peace promised by Jesus is not as the world gives but as He gives.

Citing Pope Francis again, who said that the world often “anaesthetizes us so that we do not see another reality of life, which is the cross,” the Vatican Secretary of State said that the peace that God offers us goes beyond merely earthly expectations.  “It is not the fruit of a simple compromise, but a new reality, which involves all the dimensions of life, even the mysterious ones of the cross and the inevitable sufferings of our earthly pilgrimage.  For this reason, he said, Christian faith teaches us that  “a peace without the cross is not the peace of Jesus“.

Educating to love and build peace

Cardinal Parolin also recalled St. Pope Paul VI, who in his message for the Church’s first “World Day of Peace” in 1968, cited St. John XXIII saying, “We must always speak of peace. The world must be educated to love peace, to build it up and defend it.” “Against the resurgent preludes to war […]we must arouse in the men of our time and of future generations the sense and love of peace founded upon truth, justice, freedom and love.”

The Vatican Secretary of State urged all to implore God for the grace to make peace an authentic mission in today’s world, trusting in the mysterious power of Christ’s cross and resurrection.

“With God’s grace,” he said, “the path of forgiveness becomes possible, the choice of fraternity among peoples becomes a concrete fact, peace becomes a shared horizon even in the diversity of those who make up the international community.”

Pope receives President of the Republic of Korea