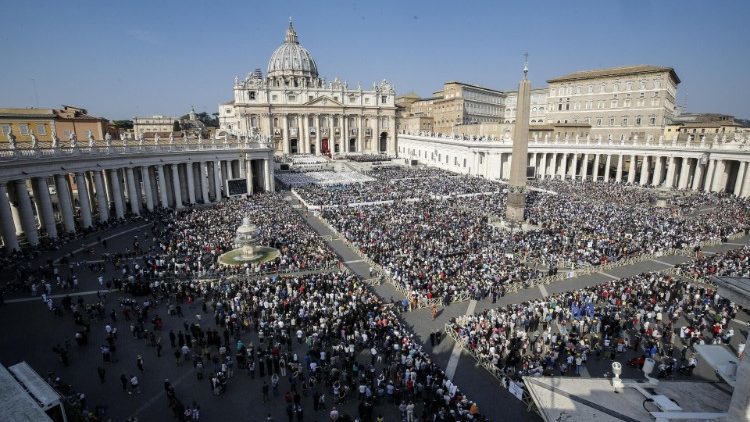 The names and brief biographies of the new saints were presented to the Pope and to the thousands of people in St Peter’s Square on Sunday morning, by the Prefect of the Congregation for the Causes of Saints, Cardinal Giovanni Becciu.

Blessed Francesco Spinelli was born in Milan on April 14, 1853. After completing his priestly formation, he was ordained a priest in 1875. He started a community of young women in Rome who consecrated their lives to Eucharistic adoration. After meeting St. Catherine Comensoli, he founded the Institute of the Adorers of the Blessed Sacrament. Blessed Francesco Spinelli fulfilled the role of both Founder and Superior. He died peacefully on February 6, 1913. Pope St John Paul II declared him Blessed in 1992.

Blessed Vincenzo Romano was born in Torre del Greco, near Naples, on June 3, 1751. In 1775 he was ordained a priest. His ministry was characterized by his special attention to those most in need, and his commitment to educating children and young people. On June 15, 1794, the town of Torre del Greco was almost completely destroyed by a violent eruption of Mount Vesuvius. Blessed Vincenzo Romano spearheaded both the material and spiritual rebirth of the community. He died on December 20, 1831. Blessed Pope  Paul VI declared him Blessed in 1963.

Blessed Maria Catherine Kasper was born on 26 May 1820 in Dernbach, Germany. A strong and extrovert child, she spent her adolescence working in the fields and even breaking stones for the construction of roads. In this context she chose to found an Institute of Sisters at the service of the humblest social classes. In 1848 she opened the House of the “Poor Handmaids of Jesus Christ”, where the poor of the country were welcomed. The Congregation spread rapidly, even outside Germany and Europe, reaching the Americas and, later, India. She died of a heart attack on February 2, 1898. Blessed Paul VI proclaimed her Blessed in 1978.

Blessed Nazaria Ignazia of Saint Teresa of Jesus March Mesa was born in Madrid on January 10, 1889. Her family moved to Mexico where she met the Sisters of the Abandoned Elders and entered the Institute in 1908. After making her first vows in 1911, she was sent to Bolivia. As she became aware of the increasingly problematic social situation there, Nazaria founded the Congregation of the Missionary Crusaders of the Church to serve the poor and assist women. Her life was in grave danger both in Bolivia and in Spain during the civil war from 1936 to 1939. In 1942 she travelled from Spain to Buenos Aires, but her health deteriorated. She died on July 6, 1943. She was beatified in 1992, by Pope St John Paul II.

Blessed Nuncio Sulprizio was born on April 13, 1817 in Pescosansonesco, in the province of Pescara, Italy. Orphaned of both parents at the age of six, he was cared for by his maternal grandmother, who taught him to seek Jesus present in the Eucharist and to invoke the Blessed Virgin. When his grandmother died Nuncio was entrusted to an uncle, with whom he worked as a blacksmith. Hard work and ill-treatment caused him to contract bone tuberculosis. He moved to Naples and was admitted to the Hospital for Incurable Diseases. There he was able to receive his long-desired First Communion. The disease degenerated quickly and he died on May 5, 1836. Nuncio was just nineteen years old. It was Pope Leo XIII who decreed his heroic virtues in 1890, and proposed him as a model for young people. On December 1, 1963, Blessed Pope Paul VI proclaimed him Blessed.