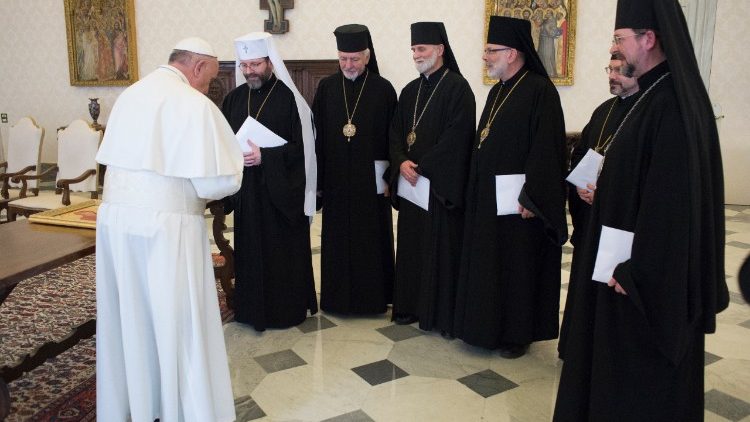 Bishop Bryan Bayda of the Ukrainian Catholic Eparchy of Toronto and Eastern Canada highlights the importance of synodality and joint efforts between the Eastern and Western churches, saying that they can learn from each other.

In a recent visit to Vatican News, Bishop Bryan Bayda, Bishop for the Ukrainian Catholic Eparchy of Toronto and Eastern Canada, stressed the importance of synodal efforts, and shared his pastoral and spiritual vision for the Eparchy as it looks to the future.

The Bishop highlighted the work of the synod of the Ukrainian Greek Catholic Church, including the good working relationship between the bishops and the Patriarch, Major Archbishop Sviatoslav Shevchuk, especially at this time “of many challenges in the world.” On the pastoral front, he said that the Eparchy had just come out of a 10-year period of looking at “vibrant parishes” as a place to encounter Jesus. This vision is being continued and expanded to the year 2030, where the focus will be on the poor and the parishes.

Referring to several letters from the Patriarch as well as other documentation, Bishop Bayda highlighted important themes that are central to this process, including presence, conversion, and accompaniment – being attentive to one another.

All of these, Bishop Bayda explains, will be considered at the synodal, regional, eparchial, and parochial levels and also “as a family”. Moreover, they coincide, on the Latin Catholic side of things, with the focus on synodality.

Learning from each other

“And truly, if there are two lungs, and East and West, that the church relies upon to give life to the body of Christ, there are so many other parts of the body – to use St Paul’s image – that we have to rely on. And, you know, it’s profound. I mean, the brain and the ear and the feet and the fingers, they all need each other.”

The Bishop explained that persecution in Ukraine over the centuries has marked the Church and has “shaped us and has transformed us,” leading to the realization that “it’s about mercy, it’s about being Christ.” He added that if some of that can be brought to the table – to interfaith dialogue, and to interactions with the Roman Church at the level of the Canadian Bishops’ Conference – then the Ukrainian Church in Canada will have lived out synodality.

“We can learn from each other that way and we can learn from the West on how to do that, and yet at the same time I think we have some examples that we can give the West, as an Eastern church in Canada, some hope, some freshness. The Holy Spirit speaks more than one language.”

Connection to Church in Ukraine

Bishop Bayda went on to highlight the connection between the Ukrainian Church in Canada and other churches, in particular the Church in Ukraine. For many Ukrainian Catholics in Canada, he said, the Russian invasion of Ukraine has moved them to increased solidarity with their countrymen and women who are going through difficult times provoked by the ongoing fighting.

He noted that though some of the Ukrainian Catholic Church’s challenges appear to be important, they are but a small part of the issues faced by so many other Eastern Churches who are experiencing “the results of war, political injustice, and maybe not being recognized in the fullest sense possible.” In this regard, he stressed the importance of being more informed about the other Eastern churches in order to better appreciate the issues they face.

“It’s about knowledge, about understanding, it’s about seeing the big picture, and always context,” he said.

Reflecting on Pope Francis’ Apostolic Journey to Canada in July, Bishop Bayda said the Holy Father’s presence can be looked at from multiple levels – from the minutia of relationships, to the grand scheme of churches and countries in relationship with each other.

He added that the Pope’s visit also highlighted that it “is important to listen to those in Canada who feel persecuted, and [who] certainly are and have been persecuted” and also to be “a listener who is investing in that pain” – not as someone who patronizes others.

The Bishop underscored that this level of accompaniment to human suffering is what St. John Paul II referred to in Salvifici doloris, when he said that suffering is not just material or physical but also mental and spiritual suffering. He added that one can unite oneself or find things in common with other people when one talks about the joys and the blessings and the celebrations, but there’s a unity that happens between hearts and souls when one shares and experiences and walks with another in their suffering.

He went on to express hope that this will happen at the parish, regional and structural level, but more importantly “heart to heart”, because “it’s about forgiveness and it’s about walking together, accompaniment.”

Pope to preside at Mass for Our Lady of Guadalupe