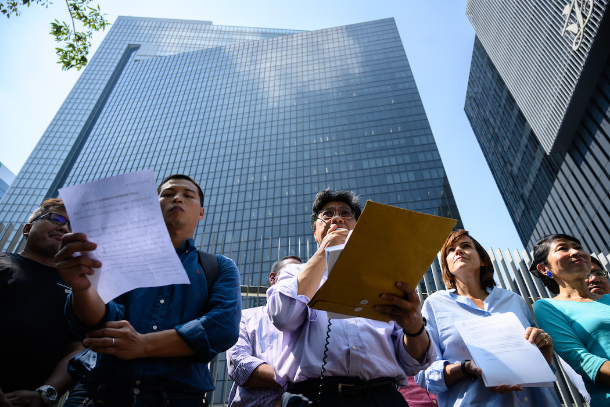 The effective expulsion of the Financial Times journalist and Foreign Correspondents Club (FCC) acting president Victor Mallett from Hong Kong, coupled with the banning of the pro-independence Hong Kong National Party (HKNP), marks a significant escalation of state interference in the Special Administrative Region by Beijing.It redefines yet again what has become known as Beijing’s “red line” that cannot be crossed, elucidated by Chinese President Xi Jinping in the city on July 1, 2007, the 20th anniversary of the territory’s handover from Great Britain to China.”Any attempt to endanger China’s sovereignty and security, challenge the power of the central government … or use Hong Kong to carry out infiltration and sabotage activities against the mainland is an act that crosses the red line, and is absolutely impermissible,” Xi said.”Hong Kong needs to improve its systems to uphold national sovereignty, security and development interests.”The U.S. State Department described Beijing’s “encroachment” on Hong Kong’s autonomy that triggered the Umbrella Revolution protests in 2014 as the biggest issue facing the city.

It also cited “government actions that had a chilling effect on political protest and the exercise of free speech” among its list of chief concerns.Mallet, the FT‘s Asia news editor and long-time senior foreign correspondent for the London-based publication, is believed to have been penalized for permitting an FCC-hosted talk by Andy Chan Ho-tin on Aug. 14. The 28-year-old Ho-tin is a founding member of the now-outlawed HKNP, the first party in the SAR to advocate for Hong Kong’s independence.It was officially banned from engaging in political activities on Sept. 24 by the Hong Kong SAR government in line with an ordinance handed down by Hong Kong Security Minister John Lee Ka-Chiu.The minister claimed the party had violated Hong Kong’s Basic Law by promoting independence from the mainland and was now deemed a threat to national security.Mallett’s journalist’s visa was not renewed in October and he was only allowed back into Hong Kong for six days on a tourist visa, not the usual 30 days typically granted to UK citizens.”Hong Kong rightly prides itself on its reputation as a place where the rule of law applies, and where freedom of speech is protected by law,” the FCC said in a statement describing what it called the first crackdown of its kind on a foreign reporter in the territory.”In the absence of any reasonable explanation, the FCC calls on the Hong Kong authorities to rescind their decision,” it added.Under Xi’s stewardship, Beijing has ramped up pressure on foreign correspondents operating on the mainland. It has “expelled” a handful by not renewing their visas, including former Al Jazeera journalist Melissa Chan.Mallet’s case makes it clear that foreign journalists in Hong Kong must abide by the Basic Law, respect the Party’s “one country, two systems” ideology, and not undertake or support any separatist activity, according to Tian Feilong, an assistant professor at Beihang University in Beijing.He made the remarks in an article that ran recently in the English-language Global Times, a nationalistic mouthpiece published by the Communist Party’s People’s Daily.But critics say Beijing’s interference in how Hong Kong is run is tearing away at the fabric of its agreement with London, under the party promised to maintain the local system of government until 2047.UK Foreign Secretary Jeremy Hunt said he was “very concerned” to learn of Mallett’s expulsion, adding he could “only conclude it was politically motivated.”Business groups have also voiced concern while the thousands of foreign companies based in Hong Kong are worried about these tighter controls will undermine Hong Kong’s role as a business and financial hub.In recent years, Beijing has been tightening its grip on the SAR, handpicking government officials and citing “security risks” to justify cracking down on dissenters.Freedom and democracy activists have been jailed and a garrison of the People Liberation Army (PLA) has been stationed in Hong Kong for the first time.Hong Kong’s Legislative Council (LegCo) now intends to pass a law that can imprison for up to three years anyone who “insults” the Chinese national anthem, March of the Volunteers.This would subject Hong Kong citizens to the same kind of restrictions mainlanders face.A young live-streaming star with the surname Yang who flippantly referred to the national anthem in a recent broadcast was detained by Shanghai police this month for “insulting the dignity” of the anthem and later issued two self-critical apologies on her Weibo account for her “stupid, low-level mistakes.”If enacted, the new bill would penalize anyone in Hong Kong who performs or sings the anthem “in a distorted or derogatory manner” or “publicly and willfully alters the lyrics or the score.”Schools in the territory would also be required to teach students to sing and “understand the history and spirit” of the anthem, according to the proposed legislation, Amnesty International reported.So far the chipping away of freedoms in Hong Kong has not extended to religion or the Catholic Church, which has about 500,000 lay members, plus another 20,000 on the neighboring island of Macau.Philippine migrant workers, who often head to Hong Kong to work as housemaids, nannies and entertainers, make up a large share of these.So far they have been shielded from Beijing’s  escalating campaign of religious repression.This has seen minors barred from some religious venues on the mainland, the state-sanctioned burning of Bibles in certain areas, and new edicts mandating that the national flag be raised outside churches.Nobody knows whether the issue of the Hong Kong Church’s independence from state-run religious organizations was discussed in the years of talks that led to a historic deal on Sept. 22 of this year between Hong Kong and Beijing on the appointment of bishops.Some wonder if this was among certain details of the compact that have not yet been made public.Meanwhile, Macau is something of an historical anomaly. It used to belong to the Catholic Archdiocese of Goa and Daman in southern India, another former Portuguese colony, but now reports directly to the Vatican in Rome.Hong Kong’s situation is slightly more complicated. It is a de jure suffragan diocese under the Archdiocese of Guangzhou in South China but in practice it also reports to Rome.Amid Beijing’s ever-tightening crackdown on religion and dissidents, pundits now question how long Hong Kong can keep walking this delicate tightrope before something gives.

Time for Indian Christians not to turn the other cheek