Armistice Day: remembering the fallen to understand their sacrifice 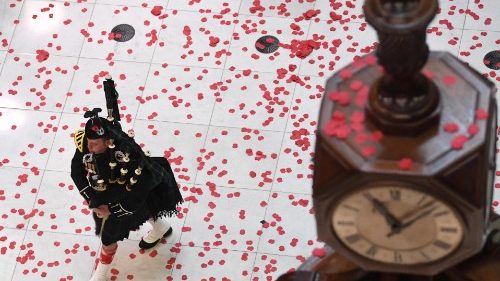 Sunday marks the 100th anniversary of the end of World War I, as well as the annual celebration of Armistice Day. Bishop of the Forces in Great Britain, Bishop Paul Mason, spoke with Vatican News about the significance of remembering those fallen in battle as well as the ways Armistice Day is being honored in the United Kingdom.

When remembering the dead is linked to learning from the past, it becomes a “taking part in the writing of our own story”, Bishop Mason said. “We understand better where we come from.” He continued, saying, “taking common responsibility for our past is very good for any nation”. It helps the nation shape its identity and “understand the sacrifices that have been made for it”. On a practical level, he said, knowing the nation’s past can help those living in the present from making the same mistakes, repeating the past.  Most importantly, we remember the fallen because:

We need to do it to remember our war dead, and to accept as a nation, that this was not in vain. This is something we respect and that we remember in that positive light.

Remembering the end of World War I

“The United Kingdom is awash with poppies at the moment,” Bishop Mason began when asked how the Bishopric is honoring the 100th anniversary of the end of the World War I. Just prior to our interview, Bishop Mason preached at an ecumenical service of remembrance held in St Margaret’s Church near Westminster Abbey. “It was very good ecumenically that we did something together”, the Bishop remarked. On Saturday evening there is a military concert in the Royal Albert Hall which he will be attending. “It brings everyone together with music and prayer. It’s something I’m looking forward to”, Bishop Mason said.

Bishop Mason will also be participating at the official celebration and wreath laying ceremony with the Royal Family at Cenotaph on Whitehall in London. “That is a good occasion”, he explained, “because not only Christian denominations, but people from all areas of our society, come together for a national act of remembrance, and for those of us who pray, a national day of prayer as well”.

Another popular name for Armistice Day in the UK is Poppy Day. These red poppies would have been seen by thousands of British troops fighting on some of the worst battlefields in Flanders, Belgium. For this reason, and because their red colour is a reminder of the blood spilt on those battlefields, it has been adopted as a symbol, worn by many, of Armistice Day.

The poem written by Canadian physician Lieutenant-Colonel John McCrae also immortalized the connection of the flower with World War I.

In Flanders fields the poppies blow
Between the crosses, row on row,
That mark our place; and in the sky
The larks, still bravely singing, fly
Scarce heard amid the guns below.

We are the Dead. Short days ago
We lived, felt dawn, saw sunset glow,
Loved and were loved, and now we lie
In Flanders fields….

Pope Francis: ‘Singing elevates soul to listen to the Spirit’