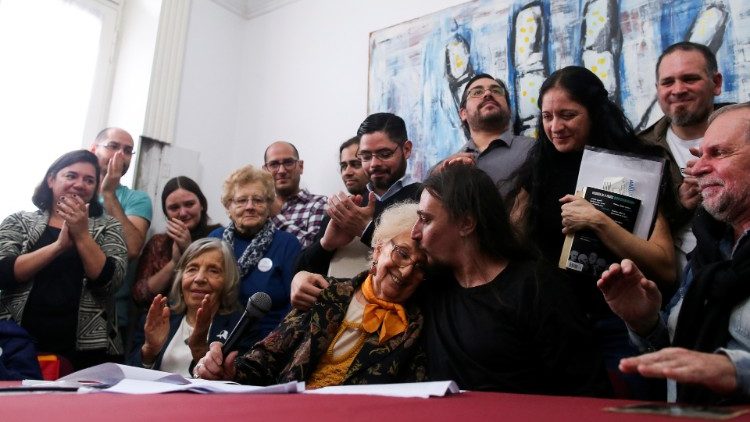 One of the founding members of Argentina’s Mothers and Grandmothers of Plaza de Mayo dies at the age of 100. Haydee Vallino spent decades searching for her daughter and son, which ended in her finding her granddaughter.

The life of Haydee Vallino was caught up in the barbaric Argentine death squads.

In June 1977, her youngest daughter Monica, who was eight months pregnant, was abducted. She gave birth to a daughter in one of the notorious detention centers, where torture and death resulted.

In August of that same year, her son Mario was kidnapped from his place of work.

Days later, the death squads went to the home of another daughter, Maria Del Consuelo, but missed her, as she had already fled the country.

Neither Haydee’s daughter nor son, who were seized, have been positively identified.

But Monica’s daughter, Maria Jose, who was taken after birth and raised by a police woman, was traced via a DNA test in 1987. At the age of ten, she returned to her family.

Seeking out the lost

Haydee and her husband had searched in vain, and then turned to the Mothers and Grandmothers of the Plaza de Mayo.

For the rest of her life Haydee expressed her profound and heartfelt gratitude to them for their vital, persistent, and humanitarian help.

Paying tribute to Haydee’s life and memory, the organization has stated that her tremendous bravery in confronting State terrorism back then was part of a collective struggle for justice.