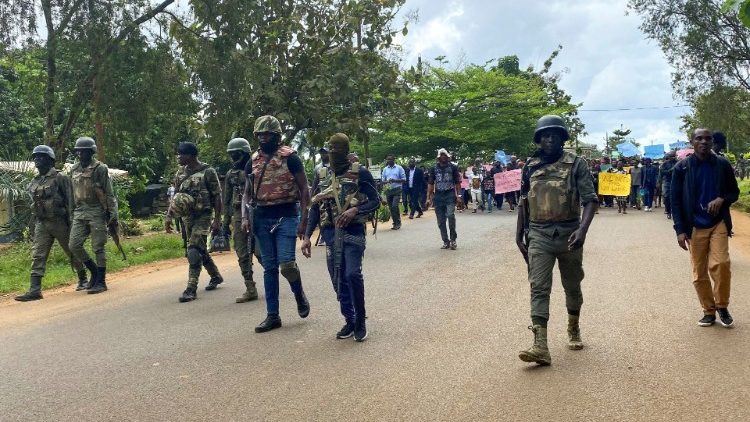 Archbishop Andrew Nkea of Bamenda restates the Church’s commitment to work for peace through dialogue in Cameroon’s Northwest and Southwest regions where a separatist crisis has dragged on for over five years.

The crisis in Cameroon which began five years ago between separatist forces and the government has plunged the English-speaking regions of the country into a deadly conflict that has claimed thousands of lives, displaced millions, destroyed properties and is creating a growing humanitarian crisis.

The immediate origins of the crisis stem from legal and educational grievances in 2016 which rapidly escalated into a secessionist political conflict with separatists calling for the creation of an independent state they call “Ambazonia.”

The violence has taken a heavy toll on the civilian populations in the Northwest and Southwest region of the nation, with attacks against schools, extrajudicial killings, kidnappings and a general sense of insecurity forcing millions of Cameroonians to flee to neighbouring countries. In all this, the Church has been vocal, calling for an end to the violence and for reconciliation between the sides in conflict.

Archbishop Andrew Nkea of Bamenda spoke to Vatican News on the sidelines of the 10th World Meeting of Families taking place in Rome, highlighting the Church’s role in the service of peace and dialogue in the country.

Archbishop Andrew Nkea of Bamenda, president of the Bishops’ Conference of Cameroon

The people are most affected in the crisis

Archbishop Nkea notes that the Church’s major difficulty in its advocacy during the crisis is navigating “the thin line of neutrality” in the sense of not belonging to any side of the conflict between the government and the separatists, while trying to advocate for peace and reconciliation.

However, the Archbishop insists that the focus is “the People of God” – the suffering people, the students out of school and those who have been displaced by the conflict and forced to flee to neighbouring countries including Nigeria. For these people, he insists, “I am ready to give my life – not for separatists, not for the government!”

Listen to our interview with Archbishop Andrew Nkea

The Church in service of peace, dialogue

Since the start of the conflict, the Church has channeled her efforts towards restoring peace and reconciliation in the country, explains the Archbishop, who is also the president of the Bishops’ Conference of Cameroon.

These efforts have also been complemented with humanitarian assistance to those affected by the fighting, including medical care backed by aid from international organizations including the WHO and the UN refugee agency.

According to the UN, about 2 million people affected by the crisis in the Northwest and Southwest regions of Cameroon need humanitarian assistance and 1.4 million of the most vulnerable are targeted by humanitarian partners for assistance. The UN Office for the Coordination of Humanitarian Affairs (OCHA) says over $139.9 is needed to respond to the needs of the most vulnerable and limited funding has been a major constraint in this regard.

The Archbishop further reiterates the Church’s conviction that “the only way to resolve the conflict in Cameroon is through dialogue” which the Church has been trying to facilitate between the separatists and the government, in spite of challenges.

“We focus on what is right and we go on with what is right even to the point of death. We will talk to both parties and make sure that at some point they are able to dialogue and bring this crisis to an end.”

The crisis in the English-speaking regions has led to the deaths of more than 4,000 civilians and hundreds of members of security forces.

Archbishop Nkea strongly condemns the killings, stressing that we “cannot get peace and justice by killing each other.”

“Let us realize that we are not killing ourselves to arrive at good. We can only kill ourselves and arrive at more killing and more violence.”

Pope calls on Ecuadorians to abandon violence and extremism