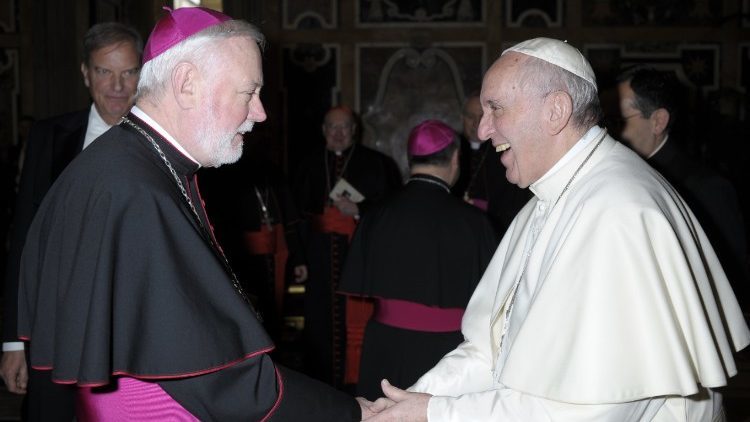 The Holy See said on Wednesday it will continue to argue against both the possession and the use of nuclear weapons, saying the total elimination of nuclear weapons is not only a security issue, but a moral, humanitarian and environmental imperative.

The Vatican Secretary for Relations with States, Archbishop Paul Richard Gallagher made the statement at a high-level meeting at the 73rd session of the United Nations General Assembly to mark the September 26 International Day for the Total Elimination of Nuclear Weapons.

“The world is not safer with nuclear weapons; it is more dangerous,” Archbishop Gallagher said.  “A policy that relies on the possession of nuclear weapons,” he said, “is contradictory to the spirit and purpose of the United Nations because nuclear weapons cannot create for us a stable and secure world, and because peace and international stability cannot be founded on mutually assured destruction or on the threat of total annihilation.”

Speaking about the environmental disasters and humanitarian consequences of the use of nuclear weapons, the Holy See official whose portfolio is equivalent to that of foreign minister, encouraged all countries to make the Comprehensive Nuclear Test-Ban Treaty (CTBT) a reality by ensuring its entry into force.

He pointed out that the Holy See has been a party to the Nuclear Non-Proliferation Treaty(NPT) since the very beginning, in order to encourage nuclear possessing states to abolish their nuclear weapons, to dissuade non-nuclear possessing states from acquiring or developing nuclear capabilities, and to encourage international cooperation on the peaceful uses of nuclear material.

Stressing that disarmament treaties are not just legal obligations but also moral commitments, Archbishop Gallagher said their entry into force can only happen if there is mutual trustbetween states and between citizens and their governments.

Archbishop Gallagher who has been participating in various meetings of the 73rd UN General Assembly, has spoken on a variety of issues such as human rights, migration, tuberculosis, death penalty and Nelson Mandela