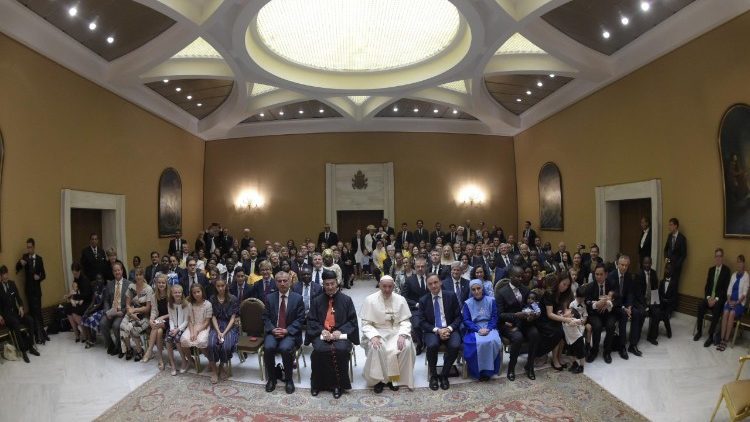 Pope Francis on Wednesday met the International Catholic Legislators Network (ICLN) who are gathered in Rome for their ninth annual meeting. Jeff Fortenberry, a member of ICLN and a member of the US House of Representatives from the state of Nebraska’s 1st Congressional District, was present at the papal audience. He spoke with Vatican News afterward regarding the Pope’s message, the US involvement in reconstructing Christian communities in Iraq, and the importance of religious freedom in the world.

Mr Fortenberry said the audience with Pope Francis was more intimate than usual because they met in a small room and the Pope was sitting near them. “He was funny, and human”, he said, and even joked with them a bit, apologizing for meeting with them at “breakfast time”. Mr Fortenberry feels that Pope Francis wanted to convey to them, “this idea of this relativistic movement, this tsunami of secularism confronting the world, and the opposite pole being a religious radicalism…both of which are twisted and inconsistent with the good of all human persons”.

Mr Fortenberry was impressed being in the Vatican and with Pope Francis, but even more so being with “legislators from all over the world, many from Africa”. He said that they are in Rome to discuss issues that “ought to bind all of humanity, namely, human dignity, conscience, religious freedom, the assault…of secular relativism, and the assault of twisted religious ideology which manifested itself in the most horrific terms…in ISIS”.

Having recently traveled to northern Iraq at the request of US Vice President Mike Pence, Mr Fortenberry witnessed first-hand how US aid in that area is helping to reconstruct what he calls “the ancient area of religious tapestry” and “a mosaic of religious pluralism” that once existed there where persons of various religions lived together. He also met some Christians who have returned to Iraq, including a priest, who had studied in Rome, and 20 young people. Yet, there are still 400,000 Yazidis living in “internally displaced” camps, and 3,500 Yazidi women who “are still held in slavery by Isis”.

The ray of hope that Mr Fortenberry sees is that people are beginning to return to their homes. Christian communities are beginning to be rebuilt, some with the help of the Knights of Columbus and aid from the US. In order to prevent another ISIS genocide from occurring again, he said that “a new type of security footprint” is needed, “that would integrate local, indigenous people – Christians and Yazidis” – into protective structures. If this can happen, the Congressman foresees that “the ancient tapestry of religious pluralism” will be restored.

If we believe that all of humanity is united because we are made in the image and likeness of God, and that we all share similar desires – our own well-being, the protection of our children, the ability to advance a bit, to have a safe space for the exercise of good choice, our conscience whose ultimate manifestation is religious freedom – this not only appeals to the Catholic world but it appeals to all of humanity.

In a world screaming for meaning, “this is the answer”, he emphasized. The unifying idea is human dignity “and its ability to express itself in conscience, and religious freedom, oriented toward what is noble and higher and good”.

Role of a Catholic legislator

Congressman Fortenberry understands his role as a Catholic legislator to be that of “light and salt”, “to invite people to the proposition of what is good, noble, and higher in the midst of real difficulty.” He takes Pope Francis’ final words, “be encouraged”, back home where that task awaits him.

First day of WMOF in Dublin: 26 keynote and breakout sessions