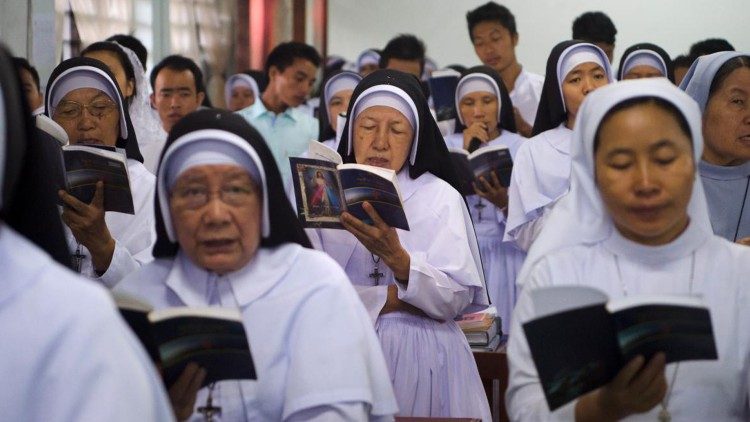 Sr. Rosalind Arokiaswami, a missionary in Myanmar with the Sisters of the Infant Jesus, recounts the decisive moment in her faith journey when she decided “to be ready to give my life for people, especially the poor.”

This is my first experience in a foreign country, one which in these last years has suffered through the Covid pandemic and the military coup of 1 February 2021, which in May resulted in the outbreak of a civil war that is still ongoing today.

This last event led to rather widespread demonstrations, protests and disorder in many parts of the country, while many people are fleeing into the jungle to save their lives.

Many religious congregations living and working in Myanmar have openly expressed their protest at the situation. One needs but to remember Sr Ann Rose Twant and her courageous gesture of kneeling in front of a soldier brandishing a rifle.

Regarding my first experience, I had contrasting feelings. On the one hand, being from another country, I was indebted to the authorities for giving me permission to work here. I was aware that my visa could be revoked and that I thus risked being sent to my country of origin. At the same time, I was fully aware that I had to be very prudent in my manner of speaking, due to the danger of being reported to the authorities.

After living through the effort of integrating into this new reality and learning a language I didn’t know at all, here was more trial: God challenged me to be ready to suffer with my people, whom he himself had entrusted to me.

I must say with humility that I had, and still have, moments of doubt and anxiety. Sometimes I asked myself if I had the patience and above all the faith to trust in God who will not disappoint us. This situation was a tried and true test of my faith. Blessed Barré [1] said: “Even when everything seems to be against every hope, continue to hope in him”. The question is whether or not I am ready to trust these words of my founder.

Slowly but inexorably, in a way unknown to me, I realised how God places me in situations in which he wants me to prove my fidelity to him. Facing situations I had never faced before and doing everything alone, I realised that “God’s excess of love” was, and is, our only certainty. This was the decisive moment on my journey of faith to discover that “there was no going back”. From that moment, I decided to be ready to give my life for the people, especially for the poor. With this awareness (epiphany, I would say), in an inexplicable and providential way, I felt inside me a certain peace and calm which I had never experienced before.

So, looking at the situation in Myanmar, there is no guarantee that my life is safe. Unable to stop the civil disobedience and the people’s protest marches, the military began shooting into the demonstrating crowds. Many young people lost their lives. Many young women were killed and raped mercilessly. A great number of people is still fleeing and many of their homes were set on fire.

In this context, there is no guarantee that my life can be spared. I could die in a bomb explosion or be killed by a single bullet. It could seem scary, but this is the reality we are facing. If it is God’s will for me, I am prepared: just as Jesus gave his life for his sheep, so am I ready to give my life for the people with whom I live.

Due to the military repression, many people have lost their jobs and are unable to support their families. Merchants, without scruples, have taken advantage of the situation and raised food prices. The vast majority of the population is on the brink of starvation. If this situation continues, the result will be evermore disastrous, and the poor will be those hardest hit. It is painful and heartbreaking to see so many people starve to death for lack of food.

In light of this situation, the vast majority of the population considers the religious sisters’ presence a blessing. They appreciate our presence and support. They know that there is someone to whom they can turn at any time, to vent about their worries, their anxieties, their frustration and their mental unease. We are unable to support them financially, and they know it. Nevertheless, seeing us and our presence is in itself a blessing. In Asian culture, this aspect is very present among Buddhists, Catholics and even Hindus. It is here that I understood Blessed Barré’s prophetic insight when he asked his teachers to live with and among the poor, and to immerse themselves in their situation. “To be with them”. This is all that is expected of us. At the same time, I realised that we are being evangelised by the people with whom we live. Often, they are the best teachers for us, and I can learn a lot from them.

This became a reality when, at the end of June 2021, I went to Yangon to renew my visa and passport. I wasn’t sure whether or not my visa could be renewed. Before leaving for Yangon, I told my people to keep me in their prayers. Their spontaneous response melted my heart. They told me: “Don’t worry, sister; everything will be alright and you will get your visa. God will not disappoint you. He wants you to continue to be with us. He knows our hearts”. I realised that they were teaching me faith. Although they are poor, humble and uneducated, their faith was stronger than mine. I understand now that if God wants me to continue to serve his people, he will do what is necessary. I have nothing to worry about, only to constantly call on him to increase my faith.